My First Experience In FedEx Field 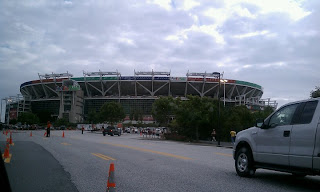 For 13 years, FedEx Field is the home to the Washington Redskins and so far, its home not only to one of the largest stadiums in pro football, but one of the oldest stadiums in the NFC East.  When FedEx opened in 1997, the stadium was built in Landover Maryland from the late owner Jack Kent Cooke.  The stadium itself was young and modern since it included luxury suites and club level seating.

Today, FedEx Field is one of the aging, but still modern stadiums in the NFL. Other NFC East teams such as the Eagles, Cowboys, and Giants have built new stadiums within the last decade. However, FedEx is home to some not pleasant experiences. Since the stadium's inception, FedEx has been home to traffic nightmares, poor fan experiences, poor concession stands, not enough bathrooms, and major parking issues. In some cases, it took fans nearly five hours to get in and out of the stadium.

Despite the complaints, I took a visit to FedEx last weekend for the Redskins preseason opener against the Buffalo Bills. As expected, traffic was a challenge, but my family was able to find parking. The seats for the first game were awesome. I was literally close to the field, and I was able to see the Redskins players practice, and see other local media personalities. 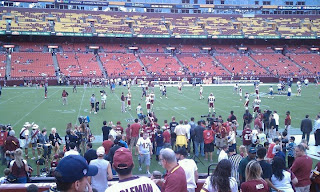 As for the concession stands, they weren't that attractive. I highly suggest you eat somewhere else before coming into the stadium unless you love wings and hamburgers from Johnny Rockets or you want some Pizza from Papa Johns. Also, one of the new amenities the Redskins added is a brand new high definition video screen on both ends of the field and they look very impressive. As for the game itself, the Redskins won in blowout fashion. Despite being a meaningless game, the fans were very happy with the result given last year's 4-12 record and they feel very optimistic for the upcoming season. However, the fans did booed a person wearing a Dallas Cowboys jersey during the game even though the game didn't involve the Cowboys at all.

So if you're a hardcore Redskins fan who hasn't been to FedEx Field before, then you should try attending to  a regular season game this season, or attend a preseason game next year. However, you must get to the stadium at least two hours early because traffic around that area can be very difficult to navigate, and parking isn't guaranteed even if you have a parking pass. Taking the metro rail is also a good alternative if you want to avoid the traffic headaches. Overall, the fan experience isn't that bad as many people perceived it to be, but plan extra time and patience while arriving to the stadium.
Posted by YasinJ