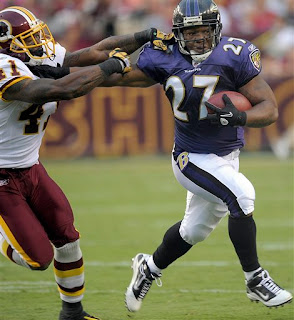 Last Saturday night, the local and national media got a good indication on why the Washington Redskins will win between 6 to 8 games this year. They are an improved football team, but a brutal regular season schedule, some flaws and injuries on offense and defense, and a 23-3 lost from the Baltimore Ravens proved that this team is far from being a playoff contender even with quarterback Donovan Mcnabb.

The Redskins offense had a good opening drive to start off the game. Mcnabb converted three third downs in that drive, including a long completion to Anthony Armstrong. But the Redskins failed to get six points on the board, and had to settle with a field goal. Unfortunately, that was the only time the Redskins got to the red zone until the closing moments of the 1st half.

This game was a defense battle on both sides of the ball and it became a 3-3 tie for most of the 1st half. While the Ravens struggled on offense, do not be fooled on what you saw last weekend. The Ravens ran a conservative approach on offense, and they won't do the same when the regular season starts. However, they weren't conservative enough to run a trick play. Late in the 2nd quarter, coach John Harbaugh  pull some trickery plays on special teams.  On 4th and 6, third-year safety Haruki Nakamura took a direct snap and ran it for 51 yards until he was tackled at the one yard-line .This led to a Ravens touchdown and took a 10-3 lead into halftime.

Since its preseason, I will only analyze the performance from the starters in the 1st half. Anyway, the offensive line just got destroyed by the Ravens front seven. The Ravens came out blitzing at the quarterback and it work to their advantage. Linebacker Terrell Suggs was having a field day with rookie tackle Trent Williams. He had no problems bypassing Williams and getting after Mcnabb.

Also, running back Larry Johnson struggle to find any holes and consistency with the running game. Mcnabb was sometimes inaccurate with his pass attempt, which led to a careless interception. With the offensive line getting abused from the Ravens defense, it led to three injuries on offense. Mcnabb got a sprain ankle, Williams suffered a minor arm injury, and fullback Mike Sellers suffered a knee injury.  Both Mcnabb and Sellers will not play this friday against the N.Y. Jets.  Backup quarterback Rex Grossman will start with the first team this Friday and Williams should be ready to go as well.


However, the most significant injury occurred on defense. Free safety Kareem Moore is out 4 to 6 weeks because of a torn medical collateral ligament in his right knee. These injuries issues isn't a big deal since its only preseason. But injuries to Mcnabb's ankle could become a serious issue for the Redskins when the regular season begins, and given Mcnabb's history of injury issues,  there is a good chance that Grossman could be seeing more playing time with the offense this season. So this friday, we will have a good idea on how Grossman performs with the starting offensive unit.

The thrid preseason game always features the starters playing the entire first half and some portions of the 2nd half. However, in this match-up, the Redskins won't catch a break against the defensive minded Jets team. Given that the Jets have the number one defense in the NFL last season, the Redskins offensive line could get another beat down from linebackers Bart Scott and David Harris. Also, let's hope there isn't more injuries to our starters from this game too.
Posted by YasinJ