Couldn't Ask For A Better Start 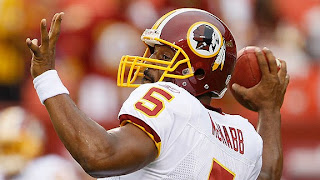 The Washington Redskins couldn't ask for a better start to their  2010 preseason opener. Last Friday night, the Redskins dominated the Buffalo Bills for 60 minutes leading them to a 42-17 victory. The Redskins got off to a great start when quarterback Donovan Mcnabb threw a touchdown pass to rookie wide-out Anthony Armstrong to conclude a 11 play-80 yard drive to give the Redskins a 7-0 lead.

Moments later, cornerback De-Angelo Hall got an interception and return it to the Bills 10 yard line to set up the first of two touchdowns passes from backup quarterback Rex Grossman. Grossman could be a viable backup for this team since he knows kyle shanahan's offense. Devin Thomas, who was placed as a thrid string wide receiver, also had a good game with 3 receptions for 64 yards and a touchdown. The offensive line did a good job protecting both Mcnabb and Grossman and also limited  false start penalties.

The defense perform very well in their first game under the 3-4 defense. They only held the Bills only to three points in the first half. Albert Haynesworth created havoc with the Bills offensive line, leading a sack from rookie linebacker Perry Riley. Haynesworth said he is comfortable with the 3-4 scheme and he is ready to move on from his offseason controversy.

However, the play of the game came from the special teams unit. Early in the 3rd quarter, rookie wide receiver Brandon Banks return a punt 77 yards for a touchdown. Can you imagine what the Redskins record will be  if Antwan Randell El provided that spark last season? Plays like this on special teams can really make a bad or mediocre team look like a good team. If Banks continues his electrifying role on special teams, he will make the team.

So far, the Redskins wide receiver core, which had questions during training camp, has a very good mix of veterans ( Moss, Galloway, Wade, Williams), third year players (Thomas), and rookies, (Armstrong, Banks). Head Coach Mike Shanahan will have a tough time deciding who will make the roster and the practice squad, but he will have three more preseason games to evaluate.

The Ravens come into town this weekend, and we will find out the pros and cons of the Redskins for the upcoming season.  The Redskins secondary will be tested since the Ravens will display their best receiving core in franchise history. The Ravens are also coming off their thrid straight playoff appearance under head coach John Harbaugh, and the team is poised to make a Super Bowl run.

Coming up later, my experience of my first Redskins game at FedEX Field.
Posted by YasinJ