Memo to Redskins Fans: Hold Off Your Playoff Hopes 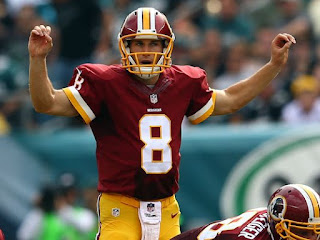 Yes, the Washington Redskins at 4-5, are in the race to win the NFC East this season. After their week 11 road game at 9-0 Carolina, their remaining schedule is manageable.

Yes, the Redskins destroyed the New Orleans Saints at home 47-14 last week and they played their most complete football game of the season. Quarterback Kirk Cousins has done a great job leading the offense and has put the dreaded quarterback controversy to rest. Even the running game was back to being respectable, and the defense is starting to get healthy.

If you look at their road losses this season, the only game the Redskins have a chance to win was at Atlanta, which was posting an undefeated 4-0 record at the time. Redskins hang in with the Falcons for 60 minutes, and Cousins led them to the game tying field goal with no time remaining. Unfortunately, Cousins threw a costly interception in overtime that resulted in a pick six and the Redskins lose a heartbreaker 25-19.

The rest of their road losses wasn't close at all. The Redskins were outplayed and outcoached by their opponents and the roster at times just did not show up to play. Granted, in those losses, the opponents was just a bad overall matchup for the Redskins.

If the Redskins want to be taken seriously in the NFC East race, they have to find ways to win on the road. While the Panthers are undefeated thanks to Cam Newton, it is a winnable game.

First, the Redskins will have to show up as a team ready to play. That means limiting self-inflicting mistakes, better tackling, no missing assignments, and better play calling from the coaching staff. Having intense practices this week is a good start to accomplishing these goals.

Secondly, they will have to stick with a ball controlled offense to keep Newton off the field and score touchdowns, not field goals. Scoring only field goals isn't going to win games against Panthers. Thirdly, the defense will have to pressure Newton, stop the running game and contain Tight End Greg Olsen.

Those tasks aren't going to be easy. The Redskins have struggled offensively vs elite defenses and the defense has major problems defending the run and passing game. On paper, this is a bad matchup for the Redskins and it appears Kirk Cousins could be struggling all day with the offense being stagnant, and the defense having trouble containing running quarterbacks.

Hopefully, the Redskins can turn the tide on their road woes and play a full 60 minutes of competitive football against the best team in the NFC.  If they show up, they have a chance to pull off the upset.

So as you heard the endless playoff chatter in the media, please remind yourselves to hold it off for now. Just like the NFL season is week to week, the same philosophy applies to the 2015 Washington Redskins.