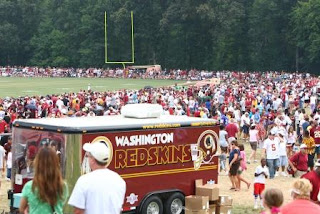 The Washington Redskins suffered a major loss today after a federal judge in Northern Virginia ordered the cancellation of the NFL team’s federal trademark registrations. This order will not take place until all appeals have been exhausted by the team. That alone could take several years.This ruling will not change anything from the Redskins point of view. They can keep the name and continue to appeal to higher levels of court as much as they can, despite their brand could suffer millions of dollars. Dan Snyder and Bruce Allen will continue to fight the court system and their critics on defending the Redskins name. They both know that the NFL and their fanbase supports the name, while congress and the political correctness crowd does not.

However, by this ruling, it is abundantly clear that common sense has been triumph by lies and nonfactual statements from the political correctness crowd, congress, and mainstream liberal media. There is no facts to support that the majority of Native Americans are offended by the Redskins name. Yet, the media and congress continues to push their nonfactual agenda. It is atrocious that in today's fast-paced society that we don't focus more on hard facts. Instead, it is more focused on agenda driven statements on why the Redskins name is offensive. Do you want congress and the federal government to determine what word is offensive and not?

The nonsense regarding this issue continues to evolve for months and years to come until Dan Snyder changes the name. Regardless your view on this issue, the Redskins name has been around for 82 years. That goes back to the early history of the NFL. It will be wrong to change the Redskins name because it would eliminate 82 years of storied history and fan connection to the name.  Many fans have a personal connection to the Redskins name for generation after generation. The "Hail to the Redskins" fight song is a great example of that pride and tradition. If you around the streets of D.C. and other parts of the U.S., if you ask the meaning of the word Redskins, most citizens will refer it to the NFL team in Washington.


For now, the Washington Redskins will not change their name anytime soon.  It is going to a long legal battle and the appeals will continue until all legal options are gone.
Posted by YasinJ