Despite a Bad Loss In Carolina, The Washington Redskins Still Control Their Own Destiny For The NFC East Title 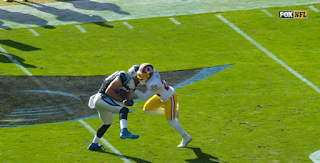 Last Sunday's loss to the Carolina Panthers 44-16 in Charlotte was extremely bad all around for the Washington Redskins. The team committed endless turnovers on offense and they couldn't stop Cam Newton and the Panthers offense. After a terrible illegal hit penalty on Redskins
cornerback Chris Culliver, which could of resulted in a game changing interception return for a touchdown, the Panthers outscored the Redskins 30-2.

The officiating dictated the outcome of the game early, and while the penalties were even for both teams, most of the big game changing penalties went against the Redskins. At this time, the Redskins aren't a good enough team to overcome bad penalty calls by the officials. Maybe they will in a few years when general manager Scott McGloughan adds more high level talent to the roster.

The loss still does not change anything in terms of their chances to clinch the NFC East. The Redskins are currently 1-1 in the division with four divisional games left in the season. The NFC East stretch begins this Sunday at FedEx Field vs the New York Giants. The Giants have won five straight against the Redskins. Even worse, Giants quarterback Eli Manning is 7-3 in his career against the Redskins. Meanwhile, Redskins quarterback Kirk Cousins has thrown six interceptions in his career against the Giants.

With the Eagles struggling on offense under head coach Chip Kelly, the Cowboys trying to make up huge ground with quarterback Tony Romo back from his injury after losing seven straight games, the NFC East could come down to the Redskins and Giants. Currently, the Redskins have the easiest schedule remaining in the NFC East. Take a look at their remaining schedules for all four NFC East teams.

With these games coming up, this is why Sunday's matchip is the game of the year in the NFC East and possibly the biggest game in Jay Gruden's head coaching career in Washington. The Redskins will need to put the loss at Carolina behind them and realize that the real season begins this Sunday. While they have major flaws on both sides of the ball, playing average football might be good enough to win the NFC East.

Image courtesy of USA Today For The Win blog