Can The Redskins Maintain First Place in the NFC East? 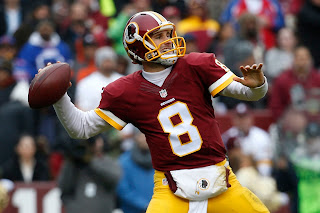 With a huge 20-14 victory against the New York Giants at FedEx Field, the Washington Redskins are entering December at first place in the NFC East with a 5-6 record. Currently, the Redskins are 2-1 in the division with three divisional games upcoming against the Dallas twice and at Philadelphia, who are both a mess right now. The Redskins can easily clinch the NFC East by winning all of their final five games of the season, or just winning three out of five games. The tiebreakers and their remaining schedule is all in their favor.

So with this in mind, can the Redskins maintain their lead in the NFC East? Despite not having a winning streak and a road victory this season, there is a good chance the Redskins can take full control of the NFC East. However, it is very hard to get a good feeling of the Redskins because they have been very inconsistent all season. While they have struggled on the road this season, a lot of their losses came against elite teams with undefeated and one loss records at the time. The Redskins final three road games of the season will come against teams with losing records.

Given their upcoming schedule, Monday Night's home game versus the Dallas Cowboys is a huge divisional matchup for the Redskins. While the Cowboys still have not won a game without starting quarterback Tony Romo, strange things happen when the Cowboys and Redskins play under the primetime stage. The Cowboys would want revenge from last year's home loss on Monday Night and hurt the Redskins division title chances. Another negative for the Redskins, they have one home win on Monday Night Football since 2000, and are 3-17 in primeitme games since Joe Gibbs retired after the 2007 season.

For the Redskins to prevent a primetime letdown at home, they will have to stick to their gameplan, play inspired football, stop the running game, score touchdowns off turnovers, and win the turnover battle.

Win or lose,  just be happy that the main focus for the Redskins in December is the games on the field insteadof the endless gossip off the field that plagued the franchise the last two years.