Redskins Destroy The Jaguars In Their Home Opener 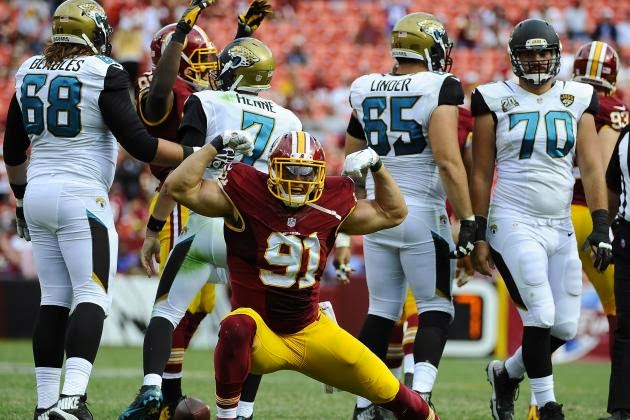 Before I quickly summarize yesterday's home opening win for the Redskins,let me get this issue out of the way. I will post my thoughts on Kirk Cousins and Robert Griffin III ankle injury in my next blog post.

Now, back to the actual game:

The Washington Redskins, despite losing Robert Griffin III and Desean Jackson to injury, defeated the Jacksonville Jaguars 41-10 in dominating fashion. The Redskins didn't let the RGIII injury derailed them and backup quarterback Kirk Cousins took over the game and threw for two touchdowns and had zero turnovers. Tight End Niles Paul had a career high eight catches for 99 yards and one touchdown, and running back Alfred Morris rushed for 85 yards and a touchdown. Even rookie wide receiver Ryan Grant had a few receptions.  Even though it was against the Jaguars, Cousins was distributing the ball to seven different receivers.

The defense had a field day against the Jaguars offense. Linebacker Ryan Kerrigan had four out of the 10 sacks that the entire defensive unit had for the Redskins. The 10 sacks was the most in a single game for the Redskins since 1977. The Jaguars never had an answer for the Redskins defense, and even when they scored a touchdown before halftime, the defense continued to pressure Quarterback Chad Henne all afternoon.

Overall, this was a great way to end the 9 game losing streak for the Redskins by destroying one of the worst teams in the NFL. Next week's opponent versus the Philadelphia Eagles will be a early road divisional test for the Redskins. It will be interesting to see if the Redskins can carry their momentum into Lincoln Financial Field.