Kirk Cousins Has a Chance to Prove Himself 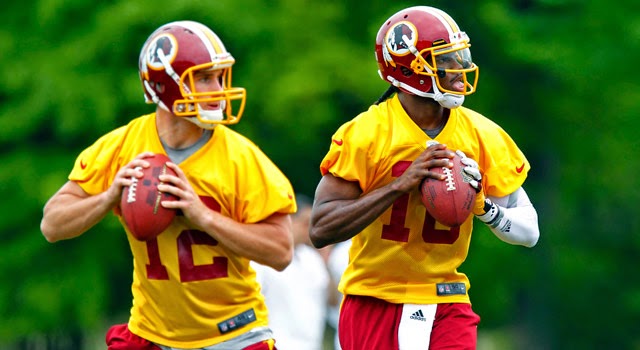 While the Redskins got their first victory of the season against the Jacksonville Jaguars in their home opener, the main headline is the status of Robert Griffin III left ankle injury. Griffin will miss 4-8 weeks, which means he may not be ready to return until November.

This could mean backup quarterback Kirk Cousins has eight weeks to prove that he can be an effective starting quarterback in the NFL.

After what he did last Sunday against the Jaguars, Redskins fans are highly optimistic about Kirk Cousins and the media and fan base begin the old trendy conversation. The good ole " quarterback controversy."

First off, there hasn't been a quarterback controversy. Cousins filled in for Griffin and played very well. Yes, Cousins is a pocket passer and fits very well for Jay Gruden offense because it sets up the quarterback to manage the game and trust the receivers to make a huge play. Griffin did struggle from the pocket, but he was never a pocket style passer. Griffin was always a running quarterback and his speed was his best asset to escape the pass rush. In 2013, coming off his knee surgery, Griffin's mobility was severely limited and expose his major flaws as a traditional quarterback.

Despite the flaws, there is a huge disparity between the two quarterbacks according to their career numbers.

As you can see, Griffin posted better numbers then Cousins. However, Cousins sample size is very small, so the jury is still open on his case.  In addition to his 10 touchdowns and 10 interceptions, Cousins is 5-5 in his career as a starter, while Griffin is 11-19.

Cousins will have a tougher task this afternoon when he faces the Philadelphia Eagles on the road. As long as the Redskins defense, wide receivers making plays, and the running game plays very well, Cousins should have a good game. Unlike last season, Cousins will enter the game with more weapons on offense to work with and for the moment, a dominant defense.

But as of right now, there is no quarterback controversy. Cousins is just filling for Griffin because of injury. The only way it becomes a controversy if Kirk Cousins plays well enough to keep the Redskins in playoff contention and possibly for the NFC East title. Then at that point, Griffin reign could end in D.C.

Therefore, Redskins fans should be patient and take it as a week-to-week approach in terms of evaluating both Cousins and Griffin.  Also, be mindful that Cousins performance will have long term effects on the team's plans for this season and beyond.