Is the Season on the Line for the Redskins? 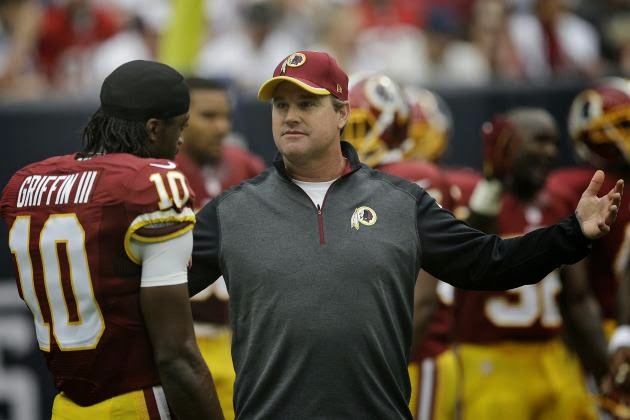 It is very rare for anyone to say a team's season hinges on just one game in the second week of the NFL season. But for the Redskins, that might be the case this Sunday vs the Jacksonville Jaguars at FedEx Field. This will be the Redskins home opener of the 2014 season.

After losing 17-6 to the Houston Texans, the Redskins currently own the longest losing streak in the NFL at 9 games. Despite hiring new head coach Jay Gruden, Robert Griffin III playing knee brace free for the first time in two years, and the addition of Desean Jackson from Philadelphia, the Redskins offense produced six points. While Griffin didn't lose the game and show some signs of improvement, he looks very tentative and scared as a pocket passer. He just doesn't trust his right knee at this point and he continues to take sacks very consistently. I'm not sure what is exactly wrong with him, but ever since his knee injury, he doesn't seem to be the same player.

But the Redskins have bigger issues then Griffin's quarterback performance. The entire team looks exactly the same as last year's 3-13 squad. The team continues to make mental mistakes on offense and special teams.

All around town and nationally, a lot of folks still think that the Redskins are better than they actually are record-wise.

However, the Redskins haven't won a regular season game since November 3rd 2013 vs the San Diego Chargers. They lost the final eight games of the regular season. From a mental standpoint, those losses drains confidence from the players. The Redskins just need to find a way to win and build from it going forward. They will have a great chance on Sunday vs the Jaguars.

While the Jaguars lost in week 1 to the Eagles 34-17, their defense cause problems for quarterback Nick Foles by forcing him 3 turnovers in the 1st half. Jaguars first year head coach Gus Bradley is a former defensive coordinator of the Super Bowl champion Seattle Seahawks. He runs a similar style defense to what Seattle does this season. While the Jaguars front seven is improved and, their secondary lacks talent. This is where Griffin needs to capitalize in the passing game if the Redskins want to win on Sunday. They have to stretch the field deep and run a balance attack on offense. Expect Jay Gruden to be very committal to the running game more this time then last week. The running game is the best asset for the Redskins offense this season.

The defense actually played as good as they can last week by holding Houston to 10 points. However, with the offense struggling in the second half, the defense started to wear down, especially in the 4th quarter. With Barry Colfield out for several weeks because of an right ankle injury, the Redskins will be thin at the defensive line on Sunday. It will be interesting to see if the defense can create a pass rush without Colfield in the lineup.


Either way, both teams aren't talented enough to overcome an 0-2 start. Therefore, the Redskins season is at stake on Sunday. A win will be give them something to build on for next week's game at Philadelphia.

However, a loss to the Jaguars at home could spell a very long season ahead, and Griffin's job security could be on the line.

Image: RGII and Jay Gruden from the Washington Times
Posted by YasinJ