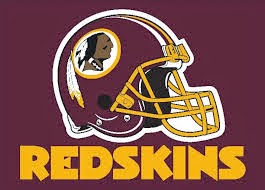 It's time to end the debate on the Washington Redskins nickname, but the national media will never allow it. Anytime a publicly known figure speaks about changing the Redskins nickname, it becomes a top national headline across all media platforms. Despite what owner Dan Snyder said about keeping the name, there are still national pundits that still wants change.

Anyway, here are my five opinionated takes on this issue. Note: I am only speaking this issue from a hardcore Redskins fan point of view.


1) My Own Opinion: I have been a Redskins fan for over 20 years. During that span, I have never viewed the Redskins as a racially derogatory name. When I wear my Redskins jersey on gameday, I always view the nickname that honors and respects all Native Americans across the United States.

2) Media Response: Secondly, the  more this issue gets brought up, the more I am getting very heated about it. It's getting to the point where the debate is filled with too much lack of research and hypocrisy. I feel like the media are just hopping on the bandwagon because it's the trendy thing to do. In addition, they are not doing their own research about the Redskins origin and its history, and ignoring 80 years of franchise history.

That alone really pisses me off. If the name is going to be changed it should be because the majority of American Indian people are opposed to it, not because some sports writer announces their intentions to stop using the name in protest.  Sorry, but the Onedia Indian Nation group is not a good enough sample size to consider them credible on this discussion. There has to be a lot more Native American groups nationwide to support the name change.

However, this is not the case. In fact, they are plenty of Native Americans around the country that supports the Redskins name. For example, Rick Reilly of ESPN had an article about this issue. He talked to some high school athletes at Wellpinit High School in Washington, were 91% of their student body is Native Americans.


"I've talked to our students, our parents and our community about this and nobody finds any offense at all in it," says Tim Ames, the superintendent of Wellpinit schools. "'Redskins' is not an insult to our kids. 'Wagon burners' is an insult. 'Prairie n-----s' is an insult. Those are very upsetting to our kids. But 'Redskins' is an honorable name we wear with pride. … In fact, I'd like to see somebody come up here and try to change it."

As you can see,  the students aren't bothered by the Redskins nickname at all and Reilly even pointed out that changing the Redskins won't be as easy as it sounds because Native Americans embrace the name.

3) Hypocrisy and Relevancy: While other known figures such as President Barack Obama, Mike Wise, Bill Simmons, and Christine Brennan are all supportive for a name change, neither of them aren't Native Americans.  That alone illustrates the hypocrisy of this debate. It's very absurd to just say that the Redskins nickname is racist name. The nickname has been around since 1932. Where were these folks back in the 1960s, 1970s, 1980s, 1990s, or 2000s? Better yet, why this is even a discussion right now?

The reality is that the debate is only happening because the Redskins are relevant again. When the team was irrelevant, and weren't being discussed that much in the national media, only the lawsuit holders cared about it. Now that the Redskins are in the news everyday for Robert Griffin III reports, suddenly, all of these random media members pop out of the nowhere and announce their intention to stop using the name.

This debate is not only media driven, but it's basically a crusade by the political correctness crowd. They will be relentless, even if some Native Americans come forward to defend the name. This is all about control over what you can say under the guise of good intentions.

4) Dangerous Sports Precedence: So let's say if the Redskins name does get changed. Suddenly, it sets up a a potential major precedence not only in the NFL, but in sports in general. What is going to stop the political correctness crowd from changing the nicknames of the Atlanta Braves, Cleveland Indians, Chicago Blackhawks, Florida State Seminoles, and the Kansas City Chiefs?

Those teams, like the Redskins, have a rich history and a loyal fanbase. Those fans of the teams don't want their nickname to be changed. But that's exactly what's going to happen if the Redskins name does change. The media will target those teams nicknames and demand for a change.

So once again, when it comes to the political correctness crowd, there is no end in sight from them.

Therefore, NFL commissioner Roger Goodell needs to be very careful on this topic and with the political correctness folks.

It is highly possible that Redskins and NFL fans, including myself, may boycott professional football all together if the name does get changed. The fans in the D.C. area love the Redskins brand and it's proud long history. A name change will not pleased a lot of fans in this area.  Also, football fans around the country might view it the same way as Redskins fans does. This could lead to loss in revenue from ticket sales and TV ratings. The NFL is a business and it wants to draw more fans. They cannot afford to lose anymore hardcore and causal fans since it has endless lawsuits from former players on concussion related injuries.

Now, some media members have compared this issue to the Washington Bullets name change to the Wizards back in the late 1990s. However, the Wizards has one-fourth of the fanbase compared to the Redskins. Therefore, the response from Redskins fans will be enormously larger.

5) Conclusion: Regardless what public opinion wants,  Dan Snyder has the final say in this matter.  The NFL and the Redskins are each a private business entity. Snyder knows that the Redskins are a profitable NFL brand with over 80 years of  history and tradition and his fans love the name. Unless the franchise take a major financial hit in game attendance, merchandise sales, advertising, and local TV ratings because they want a name change, the Redskins name will never change.

Update: I have removed Bob Burns quote on this post because he was misquoted according to multiple sources.
Posted by YasinJ