Will the Redskins Bounce Back Against The Detroit Lions? 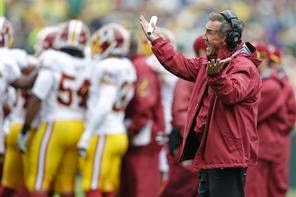 The Redskins will return home this Sunday when they host the Detroit Lions. Historically, this game should favor the Redskins because the Lions have never won a regular and postseason game in Washington. However, that long historic home winning streak is in deep jeopardy.

On paper, any football expert will pick the Lions to destroy the Redskins for a variety of reasons. The Redskins offense is completely stagnant, and the defense can't stop the run nor defend the pass. Add to the fact, that the Lions have Quarterback Matthew Stafford, running back Reggie Bush, and wide receiver Calvin Johnson, it spells for another disaster in the making. The Redskins defense doesn't have enough talent that to contain those players. The offense hasn't scored a touchdown in the first half this season.

Also, the Lions defense led by Ndamukong Suh can easily go after Redskins Quarterback Robert Griffin III all afternoon. Keep this in mind that Griffin will have his knee brace on for the entire season, so the Redskins offense will have to get creative in terms of calling read option plays. Defenses around the NFL know Grffin's injury and his limitations, and they will use blitzing schemes to attack Griffin in the pocket. Griffin will not have the mobility that he had last season and he's not an accurate pocket passer. On the flip side, he could still be effective enough to scramble out of the pocket and run for the first down when necessary. The offensive line is built for a mobile quarterback because of Mike Shanahan's zone blocking schemes, and without Grffin's mobility, the offense will stay stagnant.


While being 0-2 is terrible way to start the season, maybe this game on Sunday bring a major sense of urgency and desperation to a team that is known for resiliency. Maybe Griffin can get the offense back in rhythm, run a couple of read option plays, and have a decent performance for a full 60 minutes.  Maybe the defense finds a way to stop the run, contain Calvin Johnson, and create turnovers. Maybe the Redskins find a way to stay competitive throughout the entire game and give the fans a reason to watch them in the second half.

If those positive moments on both sides can come all together, then maybe it can result in the Redskins first win of 2013.
Posted by YasinJ