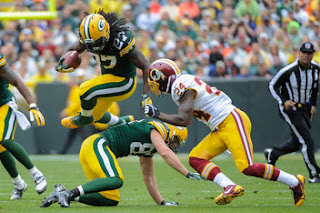 For the second straight week, the Washington Redskins had a putrid first half performance and this time, they never managed to make a comeback as they fall to the Green Bay Packers 38-20.

Once again, the Redskins look completely flat from the start. Quarterback Robert Griffin III couldn't get the offense going at all. They went 0 for 5 on 3rd downs in the 1st half alone, and the defense never stopped the Packers offense.

This was the first time in NFL history that the Packers had a 400-yard passer and a 100-yard rusher in the same game.

So Redskins continue to give away franchise and NFL records to opposing teams during the first two weeks of the season. In those two games, they have fell behind 33-7 vs Eagles and 31-0 vs Packers by the third quarter. Also in that stretch, the Redskins have been outscored 50 to 7 in the first half alone.

Here are my five observations from this game in Green Bay.

1) RGIII is Still Struggling: The Redskins appeared to have to not run their read option from last year and decide to go to a pass first traditional offense, something that Mike Shanahan rarely does. So far, it has backfired completely. RGIII cannot complete his pass attempts and the offense continues to go three and out in every offensive series in the first half. Combine that stationary offense with a bad defense on the road vs Green Bay, that's a recipe of disaster. Without RGIII running the ball, he is no major threat on offense. So the Redskins will have to go back on being themselves and run the read option offense in order to keep the opposing defense guessing.  RGIII is just not getting it done as a regular pocket passer.

Also, Griffin's statistics in the first half in each of those two games are very troubling. According to ESPN 980, Griffin has thrown for an combined 15-33 for 205 yards, three interceptions and a 28.0 quarterback rating. His numbers improve in the second half, but all of those positive statistics came when the game was out of reach.

2) Brandon Merriwather's Concussion: Brandon Merriwather continues to find stupid ways to get off the football field. On his first start of the season, he lays a helmet to helmet hit on Packers running back Eddie Lacy. Both Merriwather and Lacy was knocked out of the game because of an concussion, and Merriwather will amazingly get only a fine from the league office.

3) Ryan Kerrigan is off to a great start: Another small positive is the play of Ryan Kerrigan, He had back-to-back sacks on Rodgers early in the first quarter, resulting in a Packers field goal and punt on their first two possessions. Unfortunately, those sacks never carried over to the offense as they struggled all afternoon.

4) All NFC East Teams Lost in Week 2: As bad as the Redskins have been so far, the rest of the division hasn't been good either. The Eagles, Cowboys, and Giants all lost their games in Week 2. So through two weeks, the NFC East looks like the Big Ten Conference of the NFL.

5) A Total Team Failure: While RGIII will garner the press time on his poor play, the two losses should not be blamed at him at all. The losses were total team failures. The defense that could not tackle and cover anyone vs the Packers. In fact, the Redskins defense have given up 1,023 yards during the last two games. That's the second worst in NFL history in a two game stretch to start the season. Also, there was lack of  blocking from the offensive line and receivers dropping passes that hit them in two hands. Even when things did click, there were drive stopping penalties, especially on offense and special teams.

It's already week 3, and the Redskins season may be on the line next week. A potential 0-3 start to the season will be disastrous for this team. This is a must win game on all levels, and the Redskins will have to look very competitive in the first half . That means the offense will have to go back to their roots from last season, and the defense has to find a way of containing Calvin Johnson and Reggie Bush. That tasks will be very difficult to do because the defense seems to lack talent in the secondary, but they must do it or they will be 0-3 for the first time since 2001.
Posted by YasinJ