Redskins Lose To The Eagles 33-27 On Their Home Opener 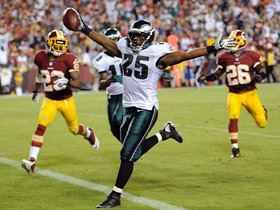 After all the hype and endless drama surrounding the first game of the 2013 season, the Redskins lose to the Philadelphia Eagles 33-27. For the Redskins, it was a tale of two halves.

In the first half, the defense looked overwhelmed on the Eagles up-tempo offense and they had no answer of stopping them. They were plenty of missed tackles and poor coverage. Their only highlight of the half is the backwards pass by Eagles quarterback Michael Vick that was tipped by Ryan Kerrigan, and it resulted in a 75 yard fumble return for a touchdown by DeAngelo Hall.

On offense, RGIII looked rusty and the entire offense went completely out of sync. In fact, in the Redskins first seven plays, they had the following miscues; lost fumble by Alfred Morris, three yard run loss by Morris, penalty for illegal shift, screen pass to Morris, interception thrown by Griffin into triple coverage, pass dropped by fullback Darrel Young, and a safety that occurred when Morris bobbled a pitch in his own end zone.

Suddenly, the Redskins, who were among the league's best in taking care of the football, look like a team that needed an extra preseason game.

By halftime, the Redskins trailed 26-7, and the nightmares of the Monday Night Massacre from three years ago came into reality.

However, the Redskins did try to mount an comeback in the second half. RGIII seemed to finally got back in his rhythm by completing 2 touchdowns passes to Leonard Hankerson. The defense finally slowed down the Eagles offense and made some key stops to keep the Redskins in the game. But the slow start in the first half was too big of a hole to overcome.

Three observations to point out of this game.

Chip Kelly's Offense Has Major Flaws: It appears that the Eagles offense was tired in the second half because they ran over 50 plays in the first half. The offense scored only one touchdown in the entire second half . I'm not sure if Chip Kelly's offense would be sustainable all season. He's going to need a lot of young fit players to run the fast paced offense for a full 60 minutes, and that's tough to do in the 16 game season. Also, Vick was exposed to some big hits, and if Kelly's offense doesn't slow down, Vick may not last the entire season again. Finally, his defense played prevent during the second half and allowed the Redskins to get back in the game late in the fourth quarter.

RGIII Wasn't 100%, But Still Looked Effective: RGIII looked like a player that didn't play football for eight months. He was rusty, and didn't had a quickness like he has last year, and therefore, he was sacked three times. Griffin did improve in the second half, and showed some promise. Although he didn't blame the loss on his rust, it will take a couple more weeks for him to adjust. On the bright side, he still threw for 329 yards and two touchdowns while playing on one leg. Just imagine what he could do when he's 100% healthy.

Dr. James Andrews Is Clueless: I have lost all of my respect for Dr. James Andrews. If he said that RGIII was 100% ready for Monday Night's game, then why RGIII looked very tentative? Did the coaches told Griffin to not scramble? And what did they exactly saw out of him during the training camp?

As much as I love RGIII as a football player, he shouldn't been starting until week 6 in my opinion. He played on one leg for most of the game on Monday.

The Redskins go on the road to Green Bay in week 2 and the Packers will be coming off a frustrating loss on the road versus the 49ers. One of these two playoff teams from last year will start the season 0-2. If the Redskins want to get back on the winning track, they will need a complete game on both sides . The defense has to contain Aaron Rodgers and his receivers, which is a very tough task on any given week. The offense has to get the running game going to establish the passing attack and the read option. Without the ground attack, RGIII will be struggling all day and the read option becomes useless.

Also, the turnover battle will be very important, and whoever wins that battle will most likely get the victory.