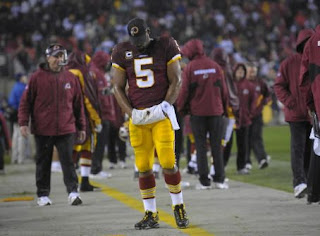 Ladies and Gentlemen, the entire country has witness once again how dysfunctional the Washington Redskins franchise really are. On the day they signed a new five year contract extension for quarterback Donovan McNabb ,and the entire season on the line, the Redskins lose to the Philadelphia Eagles 59-28 in a humiliating effort. It was the worst home loss ever at FedEx Field, and it proves the lack of talent the Redskins have on their roster.

Basically, the Redskins defense, which was last in the league in giving up total yards per game, made Vick look like the greatest quarterback in the NFL. They made backup Eagles running back Jerome Harrison look like the second coming of Barry Sanders or Emmit Smith. This defense was just awful at every facet of the game. They couldn't tackle, contain Vick, add pressure, and they couldn't cover anybody. But here is a even more dangerous statistic on how poorly the Redskins defense has performed this season according to Barry Svrluga of the Washington Post.

"The Redskins are now allowing 25.4 points per game, seventh-highest in the league and Washington's worst average since 1998, when it yielded 26.3 points an outing. The Redskins also have given up 27 touchdowns; the most they have relinquished in the 16-game-schedule era is 46 in 1988, a number they are now threatening. They're on pace to give up 48."

I know its takes time to adjust to the 3-4 defense after several years of playing in the 4-3, but if these statistics are broken by the Redskins defense for all the wrong reasons, then I don't see Jim Haslett being the defensive coordinator next season. This defense has been a major issue all season. They give up too many yards, but their high takeaway total compensates their weaknesses. However, there is going to be games that the Redskins don't get takeaways. Guess what?? They didn't get cause a turnover last night. What does it result?? The defense giving up 52 total points. So if you exclude the takeaways, this defense can't stop anyone. They already given up 31 points to the Texans, 26 points to the Rams, 31 points to the Lions, and 52 points to the Eagles.

Oh yeah, there was a pregame scrum before the game too involving one of the Redskins defensive players. Redskins safety Laron Landry was taunting Eagles wide receiver Desean Jackson. Landry said to the Jackson that "I’m going to put you asleep again."

Those words lead to a scrum between both teams before they exited to their respective locker rooms. So what did the Eagles did on their 1st play of scrimmage? Vick throw an 88 yard touchdown pass to Jackson. Guess who covered Jackson during that play?? Laron Landry. See what happens Landry when you don't shut up and put your money where your mouth is. You get burned by Jackson in pass coverage. Then again, Landry has always been awful in pass coverage in general, so it wasn't too surprising that Jackson beat him easily.

Overall, this was the worst Redskins loss I have ever seen. I was very fortunate to not be at the game last night. I know some of my friends that went there, and I feel very sorry for them to see this epic humiliation on a rainy overcast Monday evening.  This loss was an indictment on the decline of this franchise. It is still dysfunctional, a laughing stock, and it lacks talent everywhere.

I know this team is old, but that doesn't mean anything. The New Orleans Saints were the second oldest team in the NFL last year, and they still won the super bowl.  Why? Because they have talent on the roster. Outside of Donovan McNabb, Brian Orakpo, London Fletcher, Anthony Armstrong, and Brandon Banks, the Redskins have zero talent. The level of skill players between the Eagles and the Redskins are astounding, and it was proven to the fullest extent last night.

I can criticize on why the Redskins came out flat when they had two weeks to prepare for the Eagles, and why they give a contract extension to McNabb. But on the Lavar Arrington Show today on 106.7 the fan, Lavar's sidekick, Chad Dukes,  perfectly explains how he feels, and how do I feel as a Redskin fan right now. If your a Redskins fan from this area, a fan of a another NFL team, or just like sports talk radio personalities going nuts on their hometown team after a terrible loss, then this opening segment of the show is for you.

How would the Redskins respond following one of their worst defeats in franchise is beyond me. I do know this. The character of this football team will be put into the test next weekend in Nashville.