Donovan McNabb Needs to Shut Up 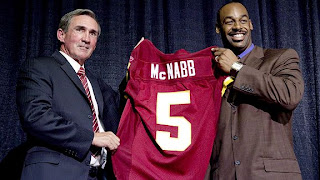 After the media driven endless saga between the relationship of RGIII and Mike Shanahan, another retired NFL player shows up in the news on trying to help out RGIII.

McNabb told NBC Sports Radio that RGIII is getting brainwashed by Mike Shanahan. Here are his quotes below from NFL.com.

I honestly think that over there in Washington, he's getting brainwashed”

First off, you are not helping him at all. Let’s remember that this is the same player that had a terrible season for the Redskins and got benched by mid-season in favor of Rex Grossman.  Griffin, who exceeds in a big spotlight, will never listen to McNabb’s advice because of his mediocre track record in the NFL.

Secondly, he’s not getting brainwashed at all. Griffin wants to get on the field as soon as possible. He just needs to listen to Shanahan and do what’s best for the team and for himself. Also, if he was brainwashed by the Shanahan’s, then Griffin will never run the read option, lead the Redskins to a NFC East title, win the NFL rookie of the year award, and set rookie records for passer rating and fewest interceptions in a single season .

You can tell from his quotes that McNabb is sounding more like a grumpy old man than someone that would guide Griffin to having a good attitude. He already has a good attitude and knows how to present himself in the public eye. How are you going to fix something that isn't broken?

So here are my two words of advice to Donovan McNabb;

Shut Up!!
Posted by YasinJ