There is No Drama between Robert Griffin III and Mike Shanahan, But the Media Wants You To Believe It 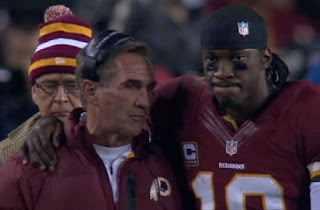 The DC Sports Media revolves on this format all year round.  Non stop Redskins coverage from late July to January, then it’s offseason and draft news in the winter and spring.  During that time span, you get some coverage of the Wizards, Caps, and  Nationals, and local collegiate sports, especially if schools like Maryland, Georgetown, VCU, or George Mason get into the NCAA Tournament in March.

However, if the Caps and Nationals have a very solid regular season and win their divisions, then the media will focus more on those teams and pray that one of them finally makes a championship run.  However, as the  Caps continue to disappoint in the playoffs, and the Nats having a terrible 2013 season, the media goes back to it’s roots to find anything to draw content, listeners and ratings.
Enter, the Washington Redskins.

It’s no surprising that the local media will heavily go all in on Redskins training camp coverage this year. The camp is in Richmond VA for the very first time. They are coming off their first division title in 13 years, and their star quarterback, Robert Griffin III has an incredible rookie season.

Then after the playoff lost to Seattle, and RGIII injured his right knee, the media has gone all in on Griffin's recovery during the offseason and at training camp.

So it leads to last Monday’s press conference. After completing the morning walk-through and being allowed to practice on 11-on-11 drills for the first time at camp, Griffin said this to the media.

Then it’s Mike Shanahan turn later that day. You can click on this link to get the video of his press conference.

Let's remember that this is the preseason. Griffin can complain publicly about his playing time and practice time and whatever he wants to. He's a very competitive athlete and he wants to be on the field. But if Shanahan plays him in a preseason game and Griffin gets injured, can you imagine the media firestorm that would come down on Shanahan? That alone is why Griffin won't play in the preseason.

Although, he's in a lose-lose situation, Mike Shanahan is handling this correctly. Griffin should stop complaining about his practice time and prepare as much as he can for the Redskins' first regular season game on September 9th against the Philadelphia Eagles. Shanahan should only start Griffin if he's 100% healthy. The Redskins already have a capable backup quarterback in Krik Cousins who can step in and lead the team in week 1 in case of any possible setbacks for Griffin.

Also, this knee injury for Griffin is normally a seven to nine month recovery. Griffin is at the seventh month of recovery, and since he hasn't missed any practice time at camp, his recovery progress seems to be very encouraging, and him and Shanahan are in the same page on that end.

As for this "rift," between them,  it's overblown because the media has nothing to talk about. Seriously, it's mid August. What else the DC sports media is gonna talk about? The Nationals are out of playoff contention and the Caps and Wizards don't start their regular season until October.

Therefore, the local media will try to spin as much controversy on this story as possible, even though there isn't one to begin with.

Anyway, back to Griffin.  He knows the plan, gets the plan and doesn't like the plan. That's understandable. However, I don't think Griffin is a selfish player. I think he's a competitive guy who wants to do everything because he thinks he's 100 percent. But the time to show he's ready to go is not in the preseason. Come September 9th, the Redskins will need Griffin back on the football field.
Posted by YasinJ