A New Level Of Discontent Part 2: The Culture of the Organization 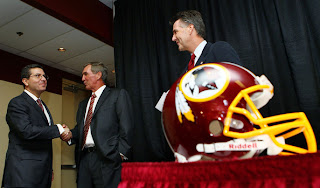 When the Redskins added Bruce Allen as their new general manager, and Mike Shanahan as their new head coach and vice president of football operations, everyone assumed that both of them will have the final say in football related decisions. However, that hasn't been the case. Shanahan has been doing the football decisions while Allen has been focusing on the marketing product of the team such as setting up alumni events.

Despite the change at the front office, the latest feud between coach Mike Shanahan and quarterback Donovan McNabb shows that this organization hasn't really change at all even with the new regime. After the loss to the Lions, the coaching staff still hasn't given a clear answer on why they bench quarterback Donovan McNabb, nor they haven't answered why the offense is struggling in protecting the quarterback, and on 3rd down conversions.

Instead, they try to put the entire blame on McNabb. In fact, the rumors of his benching goes back into week. 4 according to Jay Glazer of Fox Sports.  Kyle Shanahan, the Redskins offensive coordinator considered benching McNabb against the Philadelphia Eagles. He even cut the Redskins offensive playbook in half to get McNabb have a better understanding of the offense.This tells me that the coaching staff isn't confident with McNabb as their starting quarterback despite trading two draft picks for him.

The McNabb vs Shanahan feud has added another level of dysfunction for this organization, and it has made the Washington Redskins one of the most talked about teams in the NFL for all the wrong reasons. There were headlines during the offseason with Albert Haynesworth skipping workouts, and today's its McNabb's benching.

If you take away the Brett Favre and Brad Childress saga in Minnesota, the NFL new policy on limiting helmet-to-helmet hits, and the NFL trying to negotiate a new labor deal for next season, the Redskins will be the number one headline in the NFL nationally, not just locally. This team knew it will get the most attention ever since they acquired McNabb, and still they found even more ways to be dysfunctional. I know this team is at the midpoint of the season, but I don't really see any difference in a level of dysfunction between today and what has been during the last 11 years.

Therefore, little has change in the organization as of right now. But who knows?? The only way this feud ends is when the Redskins put together a winning streak, but that's hard to do when this football team is inconsistent every week.
Posted by YasinJ