A Big Road Victory Comes With a Big Price 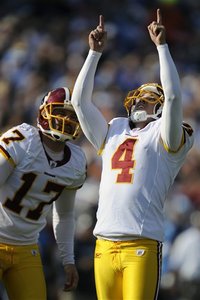 After an embarrassing 31 point home loss to the Philadelphia Eagles, the Washington Redskins responded with a huge 19-16 overtime victory against the Tennessee Titans.  The big road victory came with a big price for the Redskins. At least seven players were injured during the game.

Among them were Redskins running game Clinton Portis, who played his first game since week 4. Portis looked very good early in the game as he rushed for 32 yards on five carries. But Portis got hurt again and returned to the sidelines in the second half.  Portis was just one of the eight players injured. Here is the list of the remaining six players who were injured during the game.
RB Chad Simpson: Suffered a foot injury during pregame warmup’s (Placed on Season-Ending IR)
C Casey Rabach: Knee injury
LB Rocky McIntosh: Severe groin injury
SS Anderson Russell: Suffered a leg injury during a 87 yard punt return by Titans wide receiver Marc Mariani (Placed on Season-Ending IR)
LG Derrick Dockery: Knee injury
OLB Lorenzo Alexander: Hamstring injury
The Redskins also had four starters out prior to kickoff. Here is the list of those injured starters.
CB Carlos Rogers: Hamstring injury
SS LaRon Landry: Achilles tendon
RG Artis Hicks: Thigh injury
RB Ryan Torain: Hamstring injury
Despite these injuries on defense and a patchwork offensive line, the Redskins outplayed the Titans, a team that has won 12 straight against NFC opponents. The Redskins offensive line played their best game of the season. Tackle Stephon Heyer looked terrific at left guard, and Will Montgomery, who started at right guard in place of Hicks, performed better at center than starter Casey Rabach. Therefore, the Redskins, who were last in the league in 3rd down conversions, went 8-16 on 3rd downs and it led to game-winning 48 yard field goal by Graham Gano in overtime. Gano redeemed himself after missing a 47 yard field goal with four seconds left in regulation.
Quarterback Donovan McNabb had enough time to make plays and covert on 3rd down. Also, two dumb penalties on the Titans defense in overtime helped the Redskins to secure the victory. The defense did a good job on not allowing an offensive touchdown to the Titans after a disastrous performance last week. The Titans only scored three field goals after Mariani’s 87 punt return for the touchdown.
After the game, the off-the-field drama centered on Titans quarterback Vince Young. Young was knocked out of the game because of a thumb injury he suffered early in the 4th quarter. Backup Rusty Smith took over for the rest of the game. Young was prepared to re-enter the game, but Head Coach Jeff Fisher kept Smith instead.  When the game ended, Young tossed his shoulder pads and his own jersey into the stands. He briefly talked with Fisher and quickly left the stadium alone. So not only the Redskins knock out a starting quarterback for the second time this season, but Vince Young’s may have played his last game as a Tennessee Titan.
As for the Redskins, they are 5-5 and still in the NFC playoff picture. However, they will need to get healthy quickly or these injuries could cost them in December.
Next Week’s Game: Vs. Minnesota (3-7)
Time & Network: 1p.m. on Fox
Commentators: Dick Stockton, Charles Davis, and Jim Mora Jr.
Brett Favre comes into town this thanksgiving weekend in perhaps his final game ever at FedEx Field. The Vikings are off to a poor start with a 3-7 record. They recently fired head coach Brad Childress and defensive coordinator Leslie Frazier will be the interim head coach. Childress was hated by his own players and their 31-3 home loss to the Green Bay Packers was the final straw. So with this coaching change, the Vikings will be more motivated to play for pride this Sunday. The Redskins cannot take this opponent too lightly otherwise it could be another bad home loss.
Posted by YasinJ