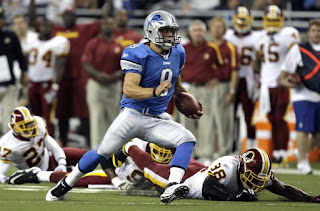 The true character of the Washington Redskins will be put into the test this Sunday as they face the Detroit Lions in Ford Field. The Lions are 1-5, last place in the NFC North, and coming off a bye week. The Redskins are 4-3 and sitting in second place in the NFC East. The last time the Redskins played in Detroit Michigan, they were humiliated. The Lions ended their 19 game losing streak and defeated the Redskins 19-14. The loss sealed the fate of former head coach Jim Zorn and Vice President of Football Operations Vinny Cerrato.

Fast Forward to Halloween 2010, the Redskins already match their last season's win total at four, and looking forward to going to their bye week with a 5-3 record.  The team is well-coached and has a defense that is aggressive and finding ways to create turnovers. However, this team has shown that they can play terrible against bad teams. This was the case in a week 3 loss to the S.t. Louis Rams.

So if the Redskins want revenge from last year's embarrassment and become one of the elites in the NFC, they will have to take the Lions seriously and be ready to play football. This team has the ability to play physical football for a 60 minutes and get off to a good start in some games. However, a bad turnover or sloppy play early could be disastrous for the team.

The offense also needs to be consistent, convert on 3rd downs, and score some touchdowns in the red zone. They shouldn't have any problems since the Lions defense isn't good. This would be a good opportunity for quarterback Donovan McNabb to finally have a bounce back game after several sub-par performances. McNabb also needs to be accurate and limit turnovers. If there is too much pressure after a play-action fake, McNabb should just take a sack, and don't force anything.

The ground game should effective because the Lions have given up four 100-yards or more during the past five games. So I expect running back Ryan Torain should be having another good game and help take pressure off McNabb in the passing game.

The defense needs to continue their aggressive play and limit big plays. They will have a tough matchup in the secondary since they are covering wide receiver Calvin Johnson, who is one of the best receivers in the league. Lions quarterback Matthew Stafford will play in his first game since week 1 when he suffered his shoulder injury. Last year, Stafford put up big numbers against the Redskins by going 21 of 36 for 241 yards, and a touchdown. He also had a 87.8 quarterback rating.

Therefore, expect Jim Haslett to add more pressure on Stafford. Also, the defense does give up a lot of yards, but they are create turnovers and it has kept them in games. If the defense continues to play well, then the Redskins will have opportunities to get the victory.

Prediction: Ironically, the Redskins are 4-1 when they score 17 points, but they are 0-2 when they score 20 or more points. Those two losses came against Houston and Indianapolis. However, the Redskins should score more than 20 points today because the Lions defense have given up a lot of points. But the Lions have been very competitive in all of their games this season.

Therefore, I expect another close game today. However, I think the Redskins offense finally has a breakout game. McNabb will throw for two touchdowns, and Torain will have a rushing touchdown and his thrid straight 100+ yard game. More importantly, they will win their first game when scoring 20 or more points.

Enjoy the game everyone. It should be exciting close contest. Finally, have a happy and safe Halloween!!!