Is The NFL Really That Stupid?? 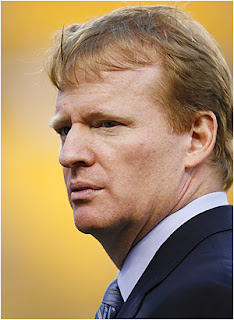 As you know, the NFL has mandated new laws on helmet-to-helmet hits to limit concussions from players. There were several hefty fines from players last week, and this week was no exception for Redskins defensive linemen Albert Haynesworth.

During DeAngelo Hall's 92 yard interception return for the go-ahead touchdown, Haynesworth delivered a block on offensive linemen J'Marcus Webb of the Chicago Bears. The video of Haynesworth hit can be viewed on NFL.com. The block occurred within 11 yards behind Hall as the cornerback ran down the sideline. Video replay shows that Haynesworth made a clean block on Webb. Coach Mike Shanahan praised Haynesworth for that hit on Webb. However, the league office wasn't happy about Haynesworth block at all.

Last Thursday, the NFL fined Haynesworth $7,500 for unnecessary roughness from his blindside hit on Webb. This is ridiculous. For example, let's just say if was Bears wide receiver Devin Hester running on that play instead of Webb. Would Haynesworth be fined for that hit on Hester? No, because Hester can easily catch up to Hall to make a tackle. So basically, Haynesworth gets fined because Webb was too slow to catch up to Hall during the return.

If NFL Commissioner Roger Goodell doesn't fix the disparity between what is a legal and a illegal hit, then fans could grow more discontent about the product on the field. The NFL is a contact sport. There is always going to be hard blows to the chest and the helmet. It's part of the game. While they trying their best to protect the players, the league needs to protect their brand too. The NFL has marketed and sell film footage's of big hits from linebackers, defensive ends, and safeties for years.  Remember, when you play in the NFL, it's a privilege, not a right. There are severe consequences in this sport, such as severe concussions, rib injuries, and torn ligaments.

I have no problem with the NFL protecting everyone, but you can't cross line on what the league has been know for decades, which is big hits on the field. That's one of the reasons why the NFL is the most-watched sport in America.

What are your thoughts on this? Do you think the NFL was wrong on fining Hanyesworth $7,500 for that hit on J'Marcus Webb?
Posted by YasinJ