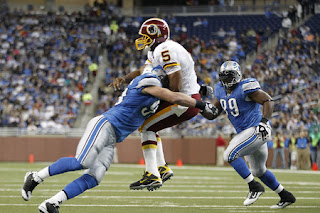 At around 1p.m. on Halloween, the Redskins are looking to get their revenge from last year's disappointing lost to the Detroit Lions. They were hoping to go to 5-3 into the bye week and set themselves for a possible playoff push late in the season.

At 4:30p.m., the Redskins leave the Motor City on the loss column with a 37-25 lost to the Lions.  But this was just more of the loss to the Lions. There is a major possibility that this loss will derail the Redskins season again because of head coach Mike Shanahan decision to bench his starting quarterback Donovan McNabb with under two minutes to go in the 4th quarter.

Since there was a lot of issues leading up to and after the benching, I will save my analysis on Shanahan's decision to bench McNabb for my next post.

However, I will analyze why the Redskins lost the game in the first place. First, the offensive line was terrible. They were beat up all day long against the Lions front seven. Therefore, McNabb was sack five times and had limited time to find an open receiver. Also, McNabb throw a terrible interception into triple coverage late in the 4th quarter. That interception led to a short touchdown drive by Lions quarterback Matthew Stafford and give the Lions the lead at 30-25. The Lions never trailed from there on.

Portis is an great pass blocker for the team, and he is often the six man blocking McNabb in a passing game. Since Portis injury, McNabb has been sacked more often then he was during his first four games. Also, 3rd down conversions has nearly killed the Redskins chances in ballgames this year. They went 2-14 on 3rd downs. That is inexcusable against a poor Lions defense.

If the offensive line continues their struggles and the offense does not covert on 3rd downs, the Redskins will lose more games late in the season. The Redskins are among the league- worst in 3rd down conversion rate.

The Redskins will have two weeks to put their disastrous loss behind them and focus on the second half of the season. Despite all of their problems on offense, the quarterback, offensive line, and the coaching staff, a victory over the Eagles will give them three wins in the division and a sweep over their divisional rival.
Posted by YasinJ