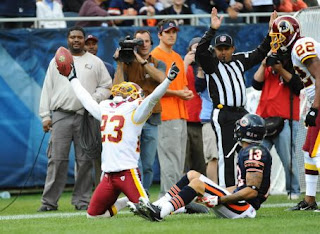 The Washington Redskins left Solider Field with a 17-14 victory over the Chicago Bears last Sunday in a game that was ugly from start to finish. Both offenses struggled to maintain possession of the football and there were a combined 9 turnovers in the game. At one point, I honestly thought that this was the worst football I have ever seen. Neither team really wanted to win this game, and both teams did whatever they can to lose. However, the Redskins won the turnover battle and therefore sealed the victory despite poor play from the offense.

The Redskins offense was just horrible all around.  Quarterback Donovan McNabb continued his inconsistent play by going 17 of 32 for 200 yards, one touchdown, and two interceptions. McNabb was also a victim of his receivers not catching the football early in the game. Despite the Bears pathetic performance on offense and great field position, the Redskins only scored 10 points the entire 1st half. The offense didn't much better either in the second half, but the defense bailed them out in critical situations. The good news is that Ryan Torain ran for his second straight 100+ yard game and he is quickly becoming a future starting running back for the Redskins.

However, the second half of this game was worthy of football comedy. Early in the 3rd quarter, the Bears had the ball at the goal line and in control to take a 10 point lead over the Redskins. Quarterback Jay Cutler decides to do a quarterback draw, and he was stopped short of the goal line by Albert Haynesworth and fumbled the ball. Haynesworth apparently jumped over the Bears's center and caused the fumble.  Haynesworth, who already had a field day against the Bears offensive line, was just creating havoc all day for Culter and the Bears offense. Also, the turnover was the first of many Culter committed  in the 2nd half.

Cutler throw four interceptions to Redskin cornerback DeAngelo Hall, which include a 92 yard return for the touchdown to give the Redskins a 17-14 late in the 3rd quarter. Hall's four interception performance in a single half ties an NFL record and it earn him NFC defensive player of the week honors. This is the second time a Redskin defensive player earned that award this year. Hall is also the third Redskin to have a four-interception game; the others were Sammy Baugh in 1943 and Dan Sandifer in 1948.

Another factor in Hall's amazing performance is Cutler's poor play at quarterback. He proved that he is today's version of Jeff George. Most of his interceptions he thrown were just awful, and his receivers ran the wrong route too. I'm just glad the Redskins never traded for him, otherwise it could be another disaster in the making.

Anyway, two of the Redskins most criticized players propelled their team to a 4-3 record, and a 6-1 record in the NFC. If the Redskins continue to find ways to win ugly in a wide open NFC, they could find themselves in the playoff discussion in December. However, the offense needs to be consistent, limit turnovers, and score more points. This team won't win anymore games if they continue to score 17 points per game. Finally, I am pleased that the defense is being more aggressive, and creating turnovers in key moments. They already matched their takeaway total from last season.

This Halloween matchup provides a dangerous problem for the Redskins. The Lions are coming off the bye week, and they have plenty of weapons on offense led by wide receiver Calvin Johnson and rookie running back Jahvid Best. If quarterback Matthew Stafford is healthy this Sunday, then the Redskins could be in big trouble. Any team playing after a bye week in a dangerous team in the NFL, and the Lions are due for a big victory. Despite their 1-5 record, I think the Lions are a better team then the Bears, and they have been in every game so far this season. A preview of this matchup will be coming up this weekend.
Posted by YasinJ