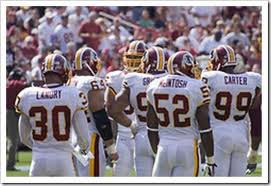 As the 2010 season starts in two days, it was good time for me to post another prediction for the Washington Redskins after watching some of these preseason games. I'm not gonna be one of those crazy Redskins fans who picks them to go to the Super Bowl because we have Mike Shanahan and Donovan Mcnabb, sorry!!  However, I will be as realistic as possible with these predictions. Here is the 2010 schedule with my predictions of their wins (W), and losses (L) on each game.


"Is there even a chance the Redskins could make the playoffs? Sure, there is. Unfortunately, it's just not much of a chance - less than 20 percent. Since '90, there have been 54 teams that lost 11 or more games, then got a new coach before the next season. How many made the playoff the first year? Ten of 54, or just 19 percent."
So there is a 19% chance that the Redskins make the playoffs this year. That's a pretty low chance, but it can happen. The 2008 Miami Dolphins won the AFC East following a 1-15 season a year ago. The 2008 Atlanta Falcons won the NFC South following their dismal 4-12 record in 2007, and the 1992 San Diego Chargers did the same as well.

However, Boswell then shows another daunting statistic.


"In the last 20 years, 115 NFL teams have changed coaches after the season. Just 17 of them - or 14.9 percent - improved by five wins. That should be sobering. But it gets worse. Of the 17 teams that showed big jumps, how many went backward in the new coach's second season? Answer: 13 of the 17. So prepare yourself. Get your mind right. This is going to take time. Enjoy a respectable losing season or celebrate a .500 year. Call it progress. Don't wake up screaming every time the Redskins lose 23-3."
I agree with Boswell 100%, and every Redskins should agree with him too. This season is about making progress since they have a lot of new players on the roster this year. There will be games that the Redskins could lose by 10 or 20 points because they playing a brutal schedule. The Redskins will face 11 of their 16 games are against teams that won 8 or more games last year, that includes seven games against teams that had 11 or more wins.  So there could be some weeks that the Redskins have a rough day, and that's okay since they are playing perennial playoff contenders this year and they adjusting to the new schemes on both sides. Also, I think Shanahan is more then capable to lead this team to the playoffs in 2011 because he has done it before in Denver, but I will save that for another time.

Anyway, another reason is that this team had so many issues on both offense and defense last season. The defense was okay, but never created turnovers and making a big stop in the 4th quarter. The offense was just pitiful and non-existent. Despite some free agent acquisitions in the offseason , staying healthy will be a key once again. How long can Mcnabb stay healthy with a sprain ankle he suffered 3 weeks ago? Can the offensive line avoid key injuries? Can the defense successfully transitioned to the 3-4 defense and make big stops in the closing minutes? And how effective the running game will be?

For the Redskins to be a playoff contender, so many things have to go their way, such as the team itself being injury free, Mcnabb making big plays on offense, and the defense still playing at a high level, but creating key turnovers to change the momentum of the game. Either way, this team will be fun to watch and much more competitive then in the last two seasons.

What do you think? How many wins do you see the Redskins winning in 2010? Do you see them making the playoffs, or remain at .500?
Posted by YasinJ