Better To Be Lucky Than Good 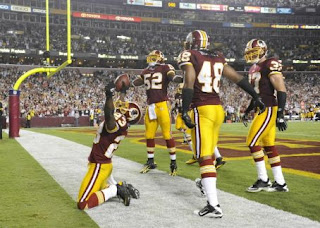 Last Sunday night, the Washington Redskins hosted the Dallas Cowboys in front of a epic atmosphere at FedEx Field, and a record crowd of  90,670 people were treated to a heart-stopping finish.  Before I do the recap of the game, let's go back to the last play of the game.

So Alex Baron's third holding call of the game gives the Redskins an 13 to 7 win over the Cowboys. This was the Redskins first victory within their division in two years even though they didn't even score a touchdown against Dallas for the third time. As usual, the rivalry provided another wacky ending, and it was only fitting that the Cowboys, who committed 12 penalties for 81 yards, blow this game on a holding call. While Redskins fans savior this victory against their hated rival, there were some key concerns and positives on both sides.

The defense had a mixed performance, but they were largely responsible for the Redskins first take-away and six points of the season.With three seconds left in the 1st half, the Cowboys, who had the ball at their own 30 yard-line, decide to run a screen pass to thrid string running back Tashard Choice. Choice was tackled for a minimum gain, and then gets the ball strip from a Redskins defender, which lead to De-Angelo Hall returning 32 yards for a touchdown. The Redskins went to halftime with a 10-0 lead.  Not many coaches will run a screen to close the 1st half while having possession at your own territory. But this is Wade Phillips and Jason Garrett. They are known for making stupid calls on offense.

Anyway, the defense did had trouble stopping the run from Cowboys running back Marion Barber. Also, quarterback Tony Romo had a field day throwing screen passes to Felix Jones, Choice, Barber,  Miles Austin and Dez Bryant and the defense had no answer to stop them. The Cowboys ended up with 380 total yards on offense, but luckily, they only scored seven points. If the Redskins defense doesn't get their act together on the stopping the run and the screen , they could have serious problems next week against Houston.

The offense however, couldn't score a touchdown during the contest, but they face a very good Cowboys defense, and the Redskins have historically  struggled against Dallas on offense. But Donovan Mcnabb had several opportunities to score. Early in their 3rd quarter, Mcnabb tried two fade passes to rookie wide receiver Anthony Armstrong, and it failed. Even worse, the Redskins couldn't score at all because of failed snap by place holder Josh Bidwell.  Other then that, Mcnabb seems to have very good chemistry with wide receiver Santana Moss and tight end Chris Cooley, and he made some nice throws to other receivers as well. I think this offense should improve over the course of the season, but they will have to score touchdowns if they have any chance to win.

Mcnabb did finished the game with 15 of 32, for 171 yards. Either way, the offense got a big break  because their defense got a turnover and fumble return for a touchdown, the Cowboys committed too many penalties, and horrendous play-calling from Wade Phillips and Jason Garrett. This victory is also great for long suffering Redskins fans, who endure a rough two years. Finally, it is great to see FedEx Field rocking again, and it's a great start to the Mike Shanahan first game as Redskins head coach. This victory will re energized this fanbase that is hungry for change and getting a competitive team on the field.


The Redskins face another high powered offensive Texans team led by Matt Schub, Andre Johnson, and rookie standout Aaron Foster. The defense will have their hands full on stopping not only the Texans aerial attack, but on the ground game from Foster. Unlike Dallas, Houston will not abandon their run game if it works to their advantage. However, their defense is still their Achilles heel, and the Redskins can easily get some points on board and try to get the running game going. Let's see how Mike Shanahan orchestrates his offense since he seen a lot of Texans last season since his son Kyle was the offensive coordinator last season.
Posted by YasinJ