The Good, The Bad, The Ugly Of The 53 Man Roster 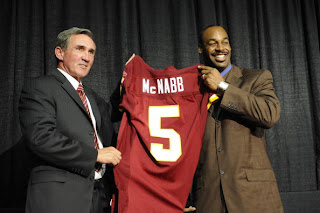 After two months of training camp and preseason action, football season is finally here, and the world seems to be right once again. Redskins fans have every right to be excited with Mike Shanahan kicking off his regime this Sunday Night, and what better way to do it aganist their long time rival, the Dallas Cowboys. With the final 53 man roster and practice squad intact, there is the good, the bad, and the ugly news as the Redskins prepare for the 2010 season.

The Good: The Redskins will be well coached, very disciplined, and much improved on the field. After 10 years of mediocrity and poor personnel decisions, owner Daniel Snyder finally listens to the fans and hires Mike Shanahan and General Manager Bruce Allen. Both Allen and Shanahan completed a major organizational change in the front office and the team is currently run more professionally then in recent years. Shanahan's optional and mandatory offseason conditioning programs, and extended training camp sessions should help the players to stay in football shape for entire season, something the Redskins did not see with the previous incumbent Jim Zorn.

Also, the Redskins improved their weak spots on offense such as the offensive line by adding  veteran tackle Jammal Brown and drafting tackle Trent Williams in the NFL Draft. They also solidified the quarterback position by adding veteran quarterback Donovan Mcnabb. Mcnabb should add leadership and improved an offense that has only averaged 16.6 points per game last season.

The Bad: Despite adding key pieces, the Redskins still remain one of the oldest teams in the league and has done really nothing to improve in most key areas. For example, the Redskins don't have fresh young players at running back. Clinton Portis may be in the best shape of his career, but at age 29, I'm not really sure how much has left in the tank. The same can be said for Larry Johnson. Running backs tend to be at the tail end of their career once they reach their late 20s to early 30s. This means that undrafted rookie Keiland Williams as their 3rd string back. That's a risky move given the age of the top two running backs. The offensive line could be a disaster again if two or more starters get injured this season, and the defense needs to stop the run under the 3-4 scheme.

The Redskins also could have one of the worst wide receiving core in the league. They virtually have no weapons on offense except Santana Moss, Chris Cooley, and Fred Davis. Veteran receiver Joey Galloway is 39 years old and he will start this Sunday along with Moss, but only has 12 receptions in the last two seasons. Devin Thomas continues to be inconsistent, and Roydell Williams hasn’t played an NFL game in three years. The good news is that rookies Anthony Armstrong  and Brandon Banks could provide a spark on offense and special teams and should give some youth on the receiver core. 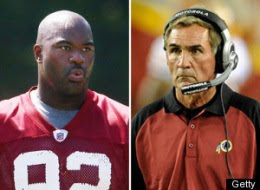 The Ugly: The Mike Shanahan Vs. Albert Haynesworth saga continues to be a major distraction with the team. It seems like everyday, there is a report that the Redskins are working a trade with Haynesworth to Tennessee, or the team is ready to let Haynesworth play this weekend. Either way, the result will have a bad ending, and Shanahan is either going to suck it up and let Haynesworth start this weekend, or keep giving him hell until the Redskins find an attractive trade offer. Knowing how he handled disgruntled players in Denver, Shanahan is likely to continue the second option until a trade is finally finalized.

What do you think?? What is the positives and negatives of the final 53 man roster for the Redskins?? Can they improved from the 4-12 record last season? Will Albert Haynesworth stay on the Redskins roster for the entire season?
Posted by YasinJ