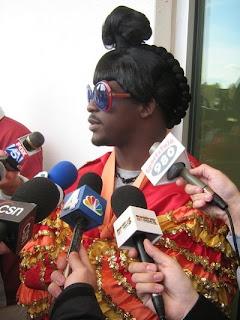 This was suppose to be a good week for running back Clinton Portis. The Redskins are coming off a big victory against Dallas despite Portis not rushing for 100 yards, and the team is preparing to face Houston this Sunday at FedEx Field. Now, Portis is rejuvenated and he is back to being himself  by presenting crazy costumes and comedic gestures to the media, but this occasion was for all the wrong reasons unfortunately.

His recent comments on how New York Jets players treat a female reporter in the locker room has cause issues with the team and the NFL. I don't know why the NFL have a problem with Ports's comments. He basically said the truth about the ordeal, and media just blows this non-issue out of proportion. Sometimes, the media can be full of  hypocrites.

So when he was ask to talk about it for the first time since his controversial remarks, Portis simply kept his mouth shut the old fashion way with a little help from his teammate Albert Haynesworth.