Aerial Show Ends In A Heart-breaker 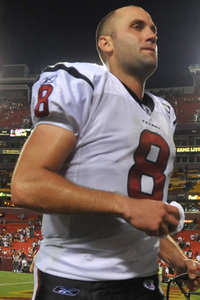 I actually needed more days to dissect this devastating  loss, because it was probably the most painful loss I've experienced in a while. The Redskins blew a 17 point lead in the 4th quarter and lost to the Houston Texans 30-27 in overtime.

The Redskins actually played their hearts out on both sides of the ball, and they still couldn't finish. Quarterback Donovan McNabb threw for 426 yards and one touchdown. McNabb became the first Redskins quarterback in 19 years to throw for over 400 yards in a single game. Running back Clinton Portis had another mediocre performance, but he still rushed for two touchdowns.  Overall, the offense had 421 total yards, a stellar improvement over their poor showing against Dallas in week one.

However, the Redskins collapsed in the 4th quarter because of three factors; the lack of a running game, blown coverage on defense, and missed opportunities on special teams.

First, the running game was a non-factor at all. The Redskins only had 18 yards rushing. That's simply isn't going to win any games in the NFL. It is very critical for the Redskins to have an efficient running game, especially when they play against a high-powered offense like the Houston Texans. That way, you keep Matt Schaub, Andre Johnson and Arian Foster off the field. More importantly, you control the clock, and essentially the ballgame. As for the running game itself, I just can't see Clinton Portis being the number one running back the rest of the way. I know he had a great offseason, but he doesn't have the speed or cutback ability he had a few years ago.

The offensive line did get a scare when rookie left tackle Trent Williams suffered a  knee injury. The good news is that an MRI shows no damage to his knee. Theoretically, Williams could be ready to start next week, but it could be a game-time decision.

Secondly, the defense had no answer to stop Houston's explosive offense. Schaub went 38 of 52 with 497 yards with three touchdowns, and an interception. The defense had sometimes blown coverages on their receivers.  However, the defense had an opportunity to seal this game. With less then three minutes to go in regulation and the Redskins leading 27 to 20, the Texans faced with 4th and 10 in Redskins territory.  With the game at stake, Schaub rose to the occasion.


Everyone in the stadium knew that Schaub is going throw to Andre Johnson and the defense was prepared. Reed Doughty actually did a good job covering Johnson, but Johnson made a great catch. It is always a complete mismatch when any corner or safety covers Johnson, especially in one-on-one coverage. There is a reason why Andre Johnson is the best receiver in the NFL.

Finally, special teams killed our chances to win as well. There were blocked kicks, and missed field goals.  Graham Gano's 29 yard field goal was blocked and it eventually swung the momentum towards the Texans. Gano had a chance to redeem himself in overtime, and it appeared he made a 52 yard field goal to win the game. But Texans coach Gary Kubiak burned a timeout just seconds before the ball was snap. After the timeout, Gano missed the field goal. I just hate it when coaches do that to iced the kicker. It is a horrible way to lose the game.

The good news from this is that the offense is back in sync except the running game, and the defense continues to be aggressive, but it cost them by giving up some big plays.

Did you know the Redskins are 0-5 against rookie quarterbacks? They will be facing another one in Sam Bradford. Well, here is some good news. Those five losses came last year under former head coach Jim Zorn and quarterback Jason Campbell. The Redskins had a mixed performance during the last two games, and if they can get the running game going and continue to establish the passing game, then they should win this game easily.

The defense needs to do a better job on pass coverage, and not give up big plays down the field. I like the aggressiveness that defensive coordinator Jim Haslett is bringing in under the 3-4 defense, but the last thing I want to see a blown assignment in coverage. Causing turnovers, and scoring some points can help too. Then again, this is the first road game for the Redskins this season, and the Rams usually play well against the Redskins. Despite that, I expect a big Redskins victory this weekend.