Going From Hope To Despair 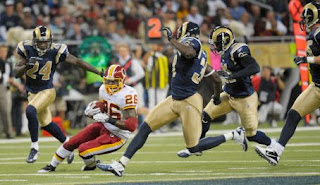 Before I do my analysis on the Redskins lost to Rams 30-16, lets look at the key statistics for each team.

These statistics are very infuriating. How can this football team let the Rams offense, (ranked 24th in total offense and losers of  27 of 28 games) put up over 350 yards of offense under a rookie quarterback Sam Bradford at the helm??  How can you let the Rams run for over 120 yards without having Steven Jackson in the 2nd half?? Luckily, there is a simple solution to this disastrous problem. The Redskins are running the wrong defensive scheme and have no running game.

Before the season started, head coach Mike Shanahan wanted the defense to switch from the 4-3 to 3-4 because it creates more problems for opposing teams. During the past several years, the Redskins were ranked in the top 10 in defense mostly because of their successful play under the 4-3. With the adjustment to the 3-4, the Redskins brought in Jim Haslett as their new defensive coordinator. Several players on the roster are playing out of position despite adding some players familiar with the 3-4. Therefore, the defense has the wrong personnel to run the 3-4 in most areas, and it results going from a perennial top-10 defense to last in the league.

It is just frustrating to see this defense give up big play after big play to a terrible Rams team. When I saw Andre Carter playing at outside linebacker, I nearly wanted to throw my baseball at the TV. Carter is a 255 pound defensive end. He supposed to rush the quarterback, not to play in pass coverage. When I saw De-Angelo Hall slipped on the field while covering Mark Clayton, I wanted to throw my remote control at the TV. Hall said last week that this is his defense, and he will cover the best receiver. He basically throwing his teammates under the bus. Clayton is probably a 3rd receiver option in other teams, and Hall couldn't cover him. It's no wonder why Hall is one of the most disgruntled players in the NFL.

The offense still couldn't score inside the opponent's 20 yard line. The Redskins had to settle for field goals, and only scored one touchdown following Kareem Moore's interception late in the 1st quarter. Anytime the offense had a big play or too, an holding infraction will be committed from Stephon Heyer. It's amazing why Heyer is even on this team. He basically penalty prone on any given play. I surely hope Trent Williams returns next week against the Eagles.

On the ground game, Clinton Portis had a big 27-yard run in the 2nd quarter, but he slide on the field because he wanted to protect the ball. It appeared that Portis suffered a wrist injury during the game and was mostly in the sidelines when the 2nd half began. Rookie Ryan Torain shows some promise early, but became an afterthought later in the game. Overall, the running game was improved in the first half, but it became ineffective in the 2nd half. Finally, special teams was a disaster even before kickoff. Punter Josh Bidwell suffered a hip injury during pregame warm-ups and he was out for the game. Graham Gano had to do the punting duties in addition to kicking field goals. Look for the Redskins to get a new punter this week.

Overall, this game was like watching a bad dream. I'm not sure if this loss was worse then the Lions game last year, but you can make the case on that easily. Ironically, both of those losses occurred on thrid week of the season. So even with new management, the Redskins find ways to compete with good teams for 60 minutes, and then lay an egg against bad teams. This trend has been happening for 10 years, and it's getting really frustrating. The more I think about this loss, the more I put blame on the players. They are getting paid millions of dollars and they aren't performing to the level of their competition.

Looking ahead to the next five games, the Redskins have a brutal schedule. They will play the Eagles, Packers, Colts, Bears, and Lions. If Shanahan and Haslett doesn't correct their errors on the 3-4 scheme and continues to have an ineffective ground attack, then a 1-6 record going into their bye week seems to be a distinct reality.

Donovan Mcnabb returns to Philadelphia to face his old team, and the reaction from Eagles fans will be interesting to watch. I will do a special preview on this big NFC East matchup later this week.
Posted by YasinJ