The Cult Is Gone 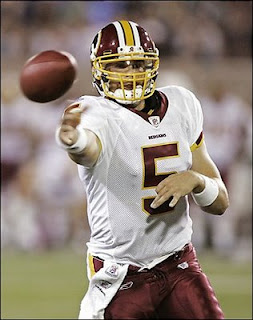 Despite being a fan favorite for the Redskins on the practice field, blogs, and in the media, Colt Brennan had no job security and today it was evident. The former University of Hawaii quarterback was released today  following the Redskins made a trade with the Baltimore Ravens. The Redskins got quarterback John Beck from the  Ravens in exchange for cornerback Doug Dutch.

It appears that Coach Mike Shanahan wants an experience third string quarterback in the roster. Beck did start four games for the Miami Dolphins in 2007 and Brennan had a brief history of knee problems. Beck will most likely backup starter quarterback Donovan Mcnabb and veteran Rex Grossman.

So Brennan was cut before he even takes his first snap in NFL regular season game. However, here is a brief video tribute for Redskins fans who believed that Brennan will start in the NFL. Unfortunately, that could happen with a different team. Anyway,enjoy Brennan's  preseason highlights from the past two years.