Drama in Ashburn on the First two days of Training Camp: UPDATED 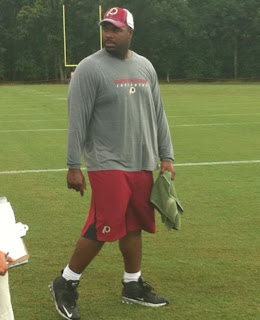 In probably one of the most bizarre first days of training camp in recent memory, Redskins head coach Mike Shanahan send a strong message to Albert Haynesworth. Be in shape and get ready to practice. Apparently, Haynesworth did not understand the message and he received major consequences for not attending offseason workouts with his teammates.

The $100 million dollar man who spent half the season in a oxygen mask has failed his conditioning test. Here is a video clip from CSN Washington on Haynesworth, who is conditioning with the coaching staff, and gets a mixed reaction from the fans.


I just don't understand Redskins fans anymore. Why they are trying to get his autograph?? He basically said to Shanahan and his teammates screw you, I don't like the 3-4 defense and I'm not getting most of the attention. So I'm going to train myself in Tennessee. Come on Redskins fans, don't praise a player who doesn't want to be in the team. The fans who booed him are not only diehards, but they are smart people.

Anyway, Haynesworth appears to have lost significant weight and be in relatively good shape. He appears to be slimmer then he was last season, and that's a good sign. The bad news is that he won't practice until he passes his conditioning test. Haynesworth did pass the 1st section of the test, but the 2nd section included two 300 yard shuttle runs. After his long bathroom break, Haynesworth failed the 2nd part of the test. Haynesworth said he couldn't have completed three 300 yard runs even in his Pro Bowl years.

Something doesn't add up. It appears that Shanahan set up Haynesworth to fail for revenge purposes or Shanahan wanted a more rigorous conditioning program specifically for Haynesworth.

Either way, I don't blame Shanahan for doing this approach to Haynesworth. He hasn't seen him practice all offseason and he needs to make sure he was in shape for training camp. After the test, Shanahan said to Haynesworth, "I guess you have never been in shape then."  Shanahan is also sending out a good message to his players. They will be no nonsense from any of the players under the Shanahan regime, something we have seen often under Jim Zorn.

So what the Redskins do with Haynesworth? He will take the conditioning test tomorrow and if he passes, he could be back in the practice field on Saturday. If he fails again, he'll retake it again. For the record, I will be Ashburn on Saturday for the first time. It should be quite an experience.

In other training camp news, cornerback Carlos Rogers signs a one year tender agreement, and rookie first round pick Trent Williams is not signed and did not appear in practice.

UPDATE 7/30/2010: Haynesworth fails his 2nd conditioning test and he will retake it for the thrid time tomorrow. Rookie Trent Williams was signed to a six year $60 million dollar deal that includes $36.5 million in guaranteed money.
Posted by YasinJ