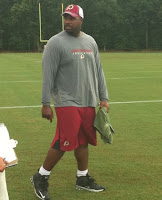 Please cut or trade Albert Haynesworth and admit your major mistake on another free agent signing.  I know you just give him a $20 million dollar check last April, but his actions prove that he doesn't want to be in the team anymore.

It is becoming clear that the Albert Haynesworth versus Mike Shanahan saga will continue on until Haynesworth passes his conditioning test. Haynesworth is getting embrasssed everyday from his coaches and the media, and it appears that he's trying to holdout longer so he can be traded elsewhere.

Despite his alleged holdout, Haynesworth has proven continuously that he is the biggest scam artist in the history of professional sports. It seems like every day I'm reading reports from the Washington Post, twitter feeds, and pro football talk that Haynesworth has either failed the test, did not participate due to a swelling knee, or not completing the test altogether because he's out of shape.

This player is being paid $100 million dollars to play nose tackle or  right defensive end for the Washington Redskins, not to complain on his knee, skipping mandatory workouts, the transition to the 3-4 defense, or being out of shape.

Head coach Mike Shanahan not only wants Haynesworth to be in football shape, but he wants him to be healthy enough to play all 16 games, something Haynesworth hasn't accomplished since his rookie season.

Also, this whole conditioning ordeal isn't a new thing for Haynesworth. He failed the same exam twice during his playing career in Tennessee. If Haynesworth can't run 300-yard shuttle runs, then he is in the wrong sport. Anybody can lose 30 to 40 pounds and still not be in shape.

Even local and national sports reporters are having a field day with Haynesworth. Washington Post Live host Ivan Carter, ESPN NFL analyst Mike Golic, and Dave Feldman and Dave Ross from FOX 5 all passed Haynesworth's conditioning test on their first try. Neither of these media personalities are not in football shape, but they still pass.

Therefore, it is hard to blame Shanahan on handling the Haynesworth situation. He has missed the mandatory offseason workouts and he is suffering the consequences.

But for you Mr. Snyder, you deserve to get blamed for this mess. Everyone knew that Haynesworth had issues on the field and yet still you give him the big contract offer. Yes, he is one of the best defensive players in the league, but he is healthy for only half the season. Did you really think that Haynesworth will play all 16 games and be a difference maker for the Redskins?

However, you given huge contracts to big time free agents in the past and it still didn't work out. Did you learn your past mistakes Mr. Snyder? What was the difference between Haynesworth's deal and Deion Sanders?, Jeff George?, or Dana Stubblefield?

Those players had back-loaded contracts and they never produce winning results on the field. This also led to a ten year period of mediocrity for the Redskins.

So Mr. Snyder, it appears you haven't learned anything on your past mistakes, and continue to ruin the franchise. However, you have made some good offseason acquisitions in the front office in terms of hiring a respectable general manager and a head coach.

But cutting Albert Haynesworth will be the icing on the cake because it will eliminate any training camp distractions for the team and they can finally focus on football. Players can finally focus on who's making the roster, and what is the team's pro's and con's headed into the season. Currently, the biggest storyline out of Redskins Camp is Albert Haynesworth and that's a big distraction for the players.

So Mr. Snyder, if you really want the Redskins to be an improved team in 2010, you will find a way to either cut Albert Haynesworth. If you can trade him for a mid level draft pick, that's fine too, but please, do anything to get rid of this fat bum off your roster preferably before the start of the preseason.