A New Redskins Stadium in Virginia Is a Catastrophically Bad Idea 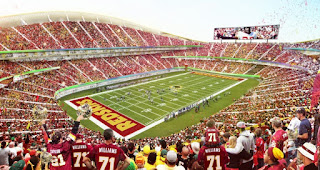 While everyone anticipates the 2016 season and the higher expectations that added after an unexpected division title last season, another upcoming issue surrounding the Redskins is where their next stadium will be located. Last Friday , a small bombshell was stated regarding the Redskins new stadium location.

Virginia Governor Terry Mcauliffe was interviewed at training camp in Richmond last Friday by former Redskin and current talk radio host Chris Cooley on Redskins owned station ESPN 980 (WTEM-AM) . According to the Washington Post, Mcauliffe wants the Redskins new stadium to be located in the Commonwealth.

“I view this as a Virginia team,” the governor said on ESPN 980 on Friday morning, during an appearance at the team’s training camp facilities in Richmond. “I know they’re in Maryland right now. But a majority of the season ticket holders are Virginians, all the players live in Virginia, we have all of your [practice] facilities. . . . We’re in very serious negotiations, as I assume other jurisdictions are. Listen, we would love to have them.”

Another surprising development is that Chris Cooley believes that the Redskins will have a new stadium announced before Election day. The timing of the possible announcement could make sense because the Redskins have their scheduled bye week on November 6th.

Economically, having their new stadium in the Commonwealth makes sense for the Redskins. Their training camp site, team headquarters, the players, coaching staff, front office, and most of their current season ticket holders are all currently located in Virginia. Redskins will be able to control their own revenues within their new stadium and Virginia could create a feasible deal that will lessen the cost of the new stadium to taxpayers. Virginia currently does not have a major professional sports team playing at the commonwealth, so it's obvious that Governor Mcauliffe sees a major economic gain from this venture.

But for the fans locally, this is a catastrophically bad idea.

Virginia is not a centralized location for a new Redskins stadium for all fans in the D.C metro area. As bad as FedEx field is right now, at least it is off the beltway and within reasonable distance and the next metro stop is a mile walk at best.

If the Redskins build their new stadium in Northern Virginia, the most likely location will be in Loudoun County between the Sterling and Ashburn area because there is plenty of land available. While the metro's sliver line will extend to Ashburn in 2019, building a new stadium in that area could cause major traffic problems. Anyone who has lived in the Northern Virginia suburbs knows that traffic is very bad on rush hour and occasionally on weekends. Adding an new Redskins stadium will add more congestion along Route 7, Route 28, Waxpool Road, Loudoun County Parkway,and the Dulles Toll Road.

On the bright side, it's a very good sign that the Redskins are trying to break their ongoing lease with FedEx Field, which is currently expiring in 2027. However, they will need to think long and hard on their next new stadium location and figure it what's best for the fans in terms of accessibility. Having the new stadium in Loudoun County will be a major setback.

Currently, the RFK stadium site in D.C. provides the best option for the next new Redskins stadium location. RFK Stadium will be torn down in 2018, so the D.C government will need to figure out what to do with the RFK site. However, working with  D.C will be difficult because RFK stadium is federally owned land and the government wants the change the Redskins name. But as always in business, once money talks, nonsense leaves. There is still a chance that the D.C. government and the Redskins could agree on a new stadium deal in the District, but the Redskins will need to be very patient, determined, and diligent.

But for right now, please stay away from Virginia. Your fanbase will be very thankful for years to come.