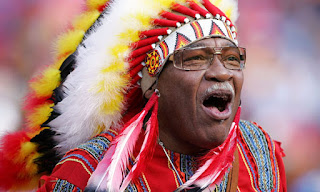 Going to Redskins games this season will sadly not feel nor sound the game anymore because they will be missing one superfan; Chief Zee. Chief Zee, known as Zema Williams, passed away early last week at the age of 75. Except for the four games he missed in 2013 due to funerals, Zema has attended every Redskins game since 1978. Chief Zee was known for his attire and super fandom of the Redskins, especially during the team's glory years from 1982-1991. While fans tailgating at FedEx Field or at the old RFK Stadium, meeting and greeting Chief Zee was the right of passage for millions of Redskins fans. His enthusiasm, attitude, and kind-fullness is going to be missed by his family, friends, and millions of Redskins fans across the world.

For folks who want to pay their respects to Chief Zee's, his viewing and funeral will be open to the public. The viewing and funeral is scheduled for Wednesday July 27th at First Baptist Church of Glenarden in Upper Marlboro Maryland. The address is 600 Watkins Park Drive. The viewing will be from 9 a.m. until 11 a.m, followed by the funeral from 11 a.m. to 1 p.m.


Image Courtesy of the Score