Despite Concerns, RGIII Will Start On Week 1 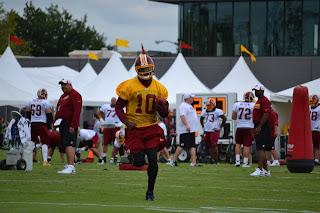 Despite unconfirmed reports from national reporters and some confusion from the head coach and team doctor last week, the Washington Redskins made it official yesterday that quarterback Robert Griffin III will start on week 1 vs. the Philadelphia Eagles. The announcement came from head coach Mike Shanahan.  Griffin's start on week 1 this Monday will complete his miraculous recovery from his ACL and LCL injury on his right knee.

Here are parts of Shanahan’s press conference from yesterday.  It starts at the 22 second mark.

While I am still concerned about Grffin's health on his right knee, I have to trust the organization and pray for the best beginning next week. The coaching staff, the team doctor, and Griffin himself said that he’s 100% ready. Since Griffin hasn't played in the preseason, we will find out whether if he has any rust on the field.

On a final note, the NFL and ESPN has announced that the Eagles vs. Redskins game has been moved to a 6:55p.m. kickoff. If your planning on going to Fedex Field this Monday, please plan accordingly.
Posted by YasinJ