Richard Crawford Is Out For The Season 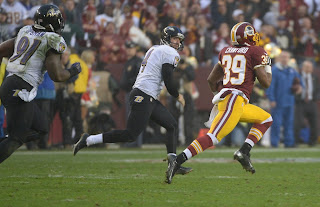 The scoreboard and statistics did show a convincing 30 to 7 victory for the Redskins over the Buffalo Bills, but in reality, they have suffered a major loss to their special teams unit.

Richard Crawford, the Redskins main kickoff and punt returner, suffered a torn LCL and ACL in his right knee while returning a punt late in the first quarter. Crawford will miss the entire 2013 season.

This injury is a major blow to the Redskins. Crawford show a lot of promise last season, and without his long punt return vs the Ravens last season, it's highly possible that the Redskins will never made the playoffs that year. Also, Crawford was improving as a cornerback all offseason because he work with Darrell Green.

Also, the sad thing about his injury is that Crawford’s made a poor decision. During his punt return, there was nowhere to go and instead of just taking a fair catch, he tries to go backward, goes left, and then he gets tackled awkwardly.  Even though he got up and limped off the field, you could tell something was seriously wrong.

This was a tough break for a young player like Crawford, and he will learn his lesson the hard way all season.

With Crawford out, Redskins will have to rely on rookie Chris Thompson, Skye Dawson, and Nick Williams to compete for the punt and kickoff return job.

Finally, this injury is another reason why the NFL needs to eliminate all preseason games.
Posted by YasinJ