Albert Haynesworth's Suspension Builds A Deeper Problem For The Organization 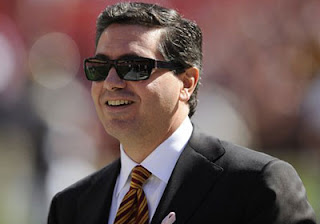 After today's events regarding Albert Haynesworth being suspended for the final four games of the regular season, it appears that Haynesworth will be one of the worst free agents  signings in franchise history. Haynesworth will join the likes of other free agent busts such as Deion Sanders, Adam Archuleta Brandon Lloyd, Dana Stubblefield, Jeremiah Trotter and Jeff George.  There are so many subplots regarding the feud between Haynesworth and head coach Mike Shanahan and it is highly likely that we may not get the truth of this ordeal anytime soon.

Still, there is a case to make for each side of the story. You can make the case that Haynesworth is wrong on this issue because he never participated in  the offseason workouts, and never appeared to be in football shape during the season. You can make the case that Shanahan should get the blame because he let this issue drag on, and it eventually became a major distraction for the team.

Those points are valid, but at the end of the day, it doesn't matter. This issue presents a major problem for the organization and it goes beyond Haynesworth and Shanahan.

For 11 years, owner Dan Snyder has never rebuilt the roster through the draft or made smart additions during free agency. Instead, he traded draft picks for older veteran players and he spent outrageous amounts of money on players that were past their prime and never produced on the field.

The results are a 42-44 record at FedEx Field since 2000, and an 85-103 record overall since taking control of the team in 1999. Even after the Redskins have a losing season, they tend to do a quick fix to their problems instead of thinking about the long-term plan for the team. For example, I will examine the most recent free agency period first, then I will focus on 2009 and 2008 offseason moves.

2010 Offseason: The Donovan McNabb signing, as much as I hate to admit it, is one of those examples. The Redskins gave up a 2nd round draft pick in 2010 and a 3rd or 4th round draft pick in 2011 to the Philadelphia Eagles. McNabb has had one of his worst seasons since he was a rookie. His 75.2 quarterback rating is the fifth worst in the NFL.

They acquired Jammal Brown of the New Orleans Saints for a 3rd or 4th round draft pick in 2011. The trade is based on McNabb’s playing time and his results this season. However, Brown has yet to stay healthy all season and has struggled at right tackle. Also, the Redskins added aging veterans such as Larry Johnson, Willie Parker, Joey Galloway, and Bobby Wade. So far, none of those players except McNabb and Brown are currently on the roster.

2008 Offseason: The Redskins traded a 2nd and 6th round draft pick to the Miami Dolphins for defensive end Jason Taylor. Taylor would play only one season for the Redskins and was released in 2009. Also, the Redskins had a good amount of draft picks to rebuild their roster, but even their draft selections were a complete disaster. Here is a list of players drafted by the Redskins in 2008.

Thanks to the poor personnel decisions and terrible spending in free agency, the Redskins are closer to being one of the worst teams in the league instead of being a contender. The worst part is that Snyder has never learned from his past mistakes. The fans are sometimes too passionate to realize that because they buy into the marketing hype created by Snyder in terms of selling tickets and jerseys. It could take 2-3 years to sort out this mess.
The team is not only old and has minimal talent, but they don't have a winning mentality. They keep bringing in star players with huge back-loaded contracts and they get treated differently within the organization than other players and coaches. Anytime a player has a selfish mentality, it doesn't translate to great production on the field.
Also, when good coaches come to the Redskins and get paid, they seem to lose their ability to coach as well. Joe Gibbs may have brought some respectability to the organization with his two playoff appearances, but they never were a title contender unlike his first tenure from 1981-1992. Steve Spurrier and Jim Zorn were terrible hires because neither of them coached at the pro level and they were never in charge of player personnel decisions.

Marty Schottenheimer led the Redskins to an 8-8 record following a 0-5 start to the 2001 season. He also had the final say in player personnel decisions. However, Snyder fired him because he wanted to get involved with the team, and he wasn't happy that Vinny Cerrato was fired by Schottenheimer. Since then, the Redskins have been a mediocre football team with the future isn’t as bright as Snyder wants it to be.

What I'm trying to prove basically is that Snyder continues to embarrass the franchise and his own fan base, and I don't believe he's going to change his mentality anytime soon. Despite Shanahan having the final say in player personnel decisions, and Bruce Allen being the general manager, I still think that Snyder is still involved in the organization.

The decision to re-sign McNabb to a five year deal before the Redskins played the Eagles on Monday Night Football was the perfect example. That signing was a marketing ploy to lure fans in and that the Redskins have a pro-bowl type quarterback for the next few years even though McNabb isn't having his best season. I also think that hiring Allen as their general manager and Shanahan as their head coach is a public relations move to let the fans think that the Redskins have a respectable front office.

So, if Snyder had any concern for us fans and any respect for the history of this franchise, he would choose three options.

A) Back-off and let Shanahan get the final say in personnel decisions.

B) Stop spending millions of dollars on free agents and don't trade high and mid-level draft picks for older players.

C) Start working on a sale process that will allow him to recover his investment and hand the team over to someone else.

Which option do you think Dan Snyder will choose??
Posted by YasinJ