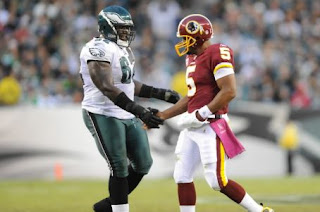 Quarterback Donovan McNabb may not had his best game during his return trip to Philadelphia, but it was good enough to give the Redskins a 17-12 victory over the Eagles. Before kickoff, McNabb received a standing oviation from a sellout crowd at Lincoln Financial Field.  When he took the field, McNabb received boos, but it didn't stop McNabb from leading the Redskins into a productive drive.

During the first half, the Redskins were hitting on all cylinders. The offense scored a touchdown in their first two drives. Running backs Clinton Portis and Ryan Torian ran for a combined 169 yards rushing. Torain also scored his first NFL touchdown on the team's opening drive. Portis did left the game with a groin injury. Apparently, that injury is more serious then expected because yesterday the team announced that Portis could miss 4-6 weeks because of his third-degree separation of his left groin.(More on this injury in my next post!!)

McNabb had a mediocre performance. He went 8 for 19 with 125 yards, one touchdown, and one interception. He also had a 60.2% completion rate, but his eight completions was his the lowest in two years.

The defense played with intensity for a full 60 minutes. They basically played a cover two deep zone formation. That way, it will limit big plays from Desean Jackson and Jeremy Maclin, two of the Eagles best wide receivers. This formation work out well,  but it led to several open targets for Lesean McCoy and Owen Schmitt, who each led the team in receiving yards. However, the defense will remembered for the big hit on Eagles quarterback Michael Vick.

Vick was sandwiched by Kareem Moore and DeAngelo Hall while running towards the end zone. Vick will miss 1-2 weeks because of his rib injury. If Vick never suffered that big hit, this game could of easily had a different result.

Instead, the Eagles turned to Kevin Kolb, and the offense went completely inept for the rest of the game. The Eagles didn't score a touchdown until late in the 4th quarter. While Kolb made the game interesting late in the game, De-Angelo Hall ended the game with an interception in the end-zone when time expired.

Overall, the Redskins had to win this game and they did. My only concern is their lack of production on offense in the second half. The Redskins need to score some points to avoid another second half meltdown, and the win a complete game, something that this team hasn't accomplish this season. Otherwise, its good to be in first place and  have two divisional wins. Finally, since the NFC East is completely wide open this year, the Redskins could have a reasonable shot of winning the division. I guess parity is good for the Redskins so far.