Clinton Portis Could Be Done As A Redskin 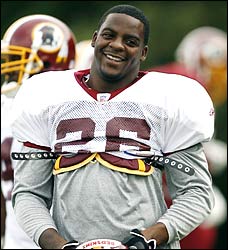 Before the season started, there had been numerous reports on Clinton Portis in regards to having his best offseason of his NFL career. Portis was attending the offseason workout program instituted by Head Coach Mike Shanahan. After the Redskins brought in two veteran running backs, it appeared that Portis's starting job was in jeopardy. But Portis regain his starting running back job after intense competition during training camp.

After two forgettable years under former Coach Jim Zorn, Portis appeared to be rejuvenated when Shanahan arrived. Portis had a great relationship with Shanahan dating back to his first two seasons in Denver. With the offseason over, Portis entered the 2010 season in football shape and motivated to have a comeback season.

However, there were questions whether if Portis would stay healthy for the rest of season? Apparently, it didn't take long to answer that question.

This past week, the Redskins announced that Portis suffered a third-degree separation of his left groin and he will be out for 4-6 weeks. This means that third year running back Ryan Torain will get the starting job. So, does this mean that Clinton Portis just played his last game as a Redskin?

It could be the case for two reasons. First, Torain has proven he can carry the load and be an effective tailback along the way. He rushed for 70 yards and had one touchdown against Philadelphia last week. Torain has the potential to elevate his game this Sunday against Green Bay, and possibly solve the Redskins running game issues.

Secondly, and most importantly, Portis is getting old. He just turn 29 last month, and typically running backs tend to be at the tail end of their careers. Also, since he signed the contract extension in 2008, Portis has been gradually declining in term of production on the field. He fell short of 1500 yards two seasons ago, and he missed the rest of the 2009 season with a concussion. Portis hasn't really been a really productive back since 2007, the last time the Redskins made the playoffs. Therefore, this injury he just suffered is sadly not a surprise given his age.

So I expect the Redskins to sideline Portis for the rest of the year, even if he is technically ready to play late in the season. That is too bad, considering that Portis is one of the best run and pass blockers on the roster. But injuries will take its toll eventually on a older player. The good news for Portis is that he's getting $7.7 million in guaranteed money, but his contract for 2011 isn't guaranteed.

So, there is a good chance that Portis will not return to the Redskins next season, and it could be the first of a major overhaul for the entire 53 man roster. There is also a chance that Portis could have a successful rehab procedure and return in week 12, but I just don't see that happening because of his history of injuries and his declining performance on the field.

So bye bye CP #26!!! Thanks for seven memorable seasons!!!
Posted by YasinJ