Redskins Show Some Improvement Against The Jets 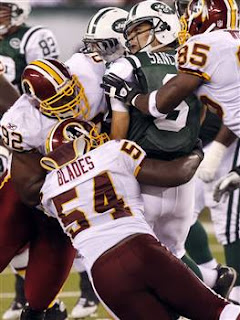 The Washington Redskins were once again involved in a defensive battle against the New York Jets last Friday. Backup quarterback Rex Grossman look decent by throwing some nice long completions to Santana Moss and Joey Galloway. But the offense didn't get six points until the two minute mark in the 4th quarter when the Redskins scored their first touchdown in two weeks, leading them into a 16 to 11 victory over the Jets. However, nobody cares what happens in the 2nd half in the preseason, so I will briefly analyze what happen in the first half.

Grossman play well with the starters against a very good defense. He went  8 for 16 and throw for 111 yards. Other then his silly turnover at the end zone to cause a safety, Grossman looked calm and collective with the starting offense. This is a good sign for Redskins fans since Grossman will most likely see a lot of action under center because of the injury situation with Donovan Mcnabb. It will be a good thing to see Grossman start for a least 3 to 4 games, but it will be a major issue if he starts half the season.

The running game looked ineffective for most of the 1st half.  Running back Willie Parker only had 8 carries for 16 yards. Parker did face one of the NFL's best run defenses, but I just don't see him in the roster after this weekend. Parker, like other older running backs, isn't been ineffective for the last few years after his breakout season in 2005. Clinton Portis did had one carry, but he sprain his ankle. His injury doesn't appear to be serious. Larry Johnson improve this week with 9 carries for 42 yards and scored the only Redskins touchdown late in the 4th quarter.  The receivers didn't do much since the offense was inept early on, although Moss and Galloway had some nice long receptions down the middle of the field.

The defense had a mixed performance. The good news is that the Redskins defense played very well against an inept Jets offense and it appears that Albert Haynesworth and coach Mike Shanahan have forgiven each other after their latest dispute. Meanwhile, Jets quarterback Mark Sanchez didn't really had a passing game until he finally throw a touchdown pass early in the second half. Basically, coach Rex Ryan wasn't pleased with the performance on offense, and the starters stayed on the field until they put some points on the board. However, the Jets running game was the only positive from their mediocre offensive showing. LaDainian Tomlinson had 11 carries for 86 yards, including a big 43 yard run from the Jets 13 yard line. This a big issue for the Redskins. Their run defense hasn't played well in the last three games, and they better correct these errors before the season begins in two weeks. The last thing Redskins fans want to see their defense, which is bringing in a new 3-4 scheme, backfire on them performance wise.

The fourth and final preseason game is the most meaningless game of them all. We will see players either auditioning to keep their roster spot or finding another team. Expect most of the starters to play a series or two, and then the 2nd, 3rd, and 4th string players will be on the field to basically trying out to make the roster. The Redskins have to trim the roster into 53 players by Saturday. Also, since this game is useless for the starters, I won't recap this game and the next few posts will be on season predictions, Malcolm Kelly getting on IR, and the list of players getting released. Also, today is the 1st day of September, and every football fan knows what time of year we are headed into.
Posted by YasinJ