Three Bold Predictions Before The Start of Training Camp 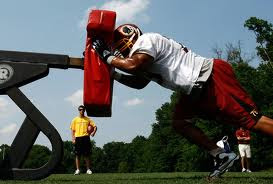 
1) Albert Haynesworth will be traded at the deadline: I'm not sure how Haynesworth will look like physically, but I'm betting on him being very effective during training camp and impress a good amount of his teammates and coaches. I'm also betting that Haynesworth will continue to be a locker room cancer and players will have some confrontation with him. That should be enough for the Redskins to consider trading him. However, it won't happen until October 19th, which will be the NFL's trade deadline, and the Redskins should be around .500 by then.

2) Donovan Mcnabb will have another superb season: Mcnabb should have another good season for the Redskins in 2010. He has a lot to prove to his critics, the Redskins fans, and the Philadelphia Eagles organizations who traded him last spring. I think Santana Moss, Larry Johnson, Clinton Portis, Chris Cooley, Fred Davis, and Devin Thomas will emerge as a better players and receivers under Mcnabb's leadership. Mcnabb should also throw for at least 30 touchdowns this season, and it will be the most for a Redskins starting quarterback since Brad Johnson in 1999.

3) The Redskins will win 8 or more games in 2010: I'm not sure how the Redskins will perform in 2010 due to a massive roster turnover. However, it should turn out for the better. Coach Mike Shanahan isn't willing to keep the status quo on certain players. Every roster spot will be up for grabs during camp, and players will have to work hard to earn their starting role. That something the Redskins haven't seen since Joe Gibbs's first regime in the early 1980s. Therefore, this team will be well-coached and much improved in all areas. But it doesn't mean that the Redskins will go to the Super Bowl. I think 8 wins will be realistic since the Redskins have a brutal schedule this year, but it won't be surprising if they get 9 or 10 wins and earning a playoff berth. The Redskins have most of their tough games at home.

There are my three bold predictions. What are your thoughts? Will the Redskins be a playoff contender or finish around .500 in 2010?
Posted by YasinJ