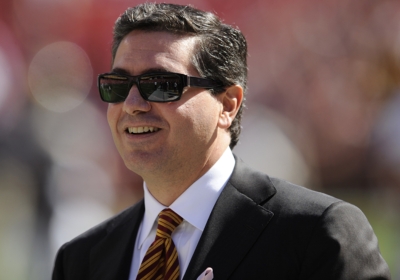 After a disastrous season from the performance on the field to suing fans for canceling season ticket plans, Redskins owner Daniel Snyder is facing media criticism once again.

Earlier this week, Lt. Denver Edick called WJLA-TV (ABC Affiliate) to told them that he is done with combat from Iraq and Afghanistan and he is coming home early. Edick's wife, who's on the cheerleading squad for the Redskins, is not aware of her husband early homecoming arrival. This seemed that ABC-7 will have the first look at a very heartwarming story about a couple's reunion after combat in the Middle East.

Until Snyder screw it up.

Snyder states that NBC 4 (WRC-TV) is the exclusive local television broadcaster of the Redskins and showing this type of story exclusively to another broadcaster violates their TV deal. Even worse, the Washington Post reported that one team official threaten to fire Edick's wife if she told the story to ABC-7. Basically, the Redskins wanted this story shown exclusively from their partner network, NBC4. Here is the actual clip of the story.

This is just wrong. There is zero excuse for any team or company to just take the story and give it to their sponsor. What is the difference between channels 4 and 7?? They both cover the Redskins extensively throughout the season and send a couple of reporters to Redskin Park each week.

When Jim Zorn was fired from the team last January, there was extensive coverage from every single local station. There was also major coverage when Mike Shanahan was hired. This story shows how stupid Snyder really is when it comes to public relations. It's obvious that he hasn't learn his lesson following the ticket scandal last August.

The good news is the Redskins made major shakeups in their public relations department. Senior Vice President Karl Swanson has resigned, and it was replaced by Tony Wyllie, a former V.P. of Communications for the Houston Texans. Wyllie will have a lot on his plate to fix the Redskins PR issues.
Posted by YasinJ