Trent Williams is a Redskin 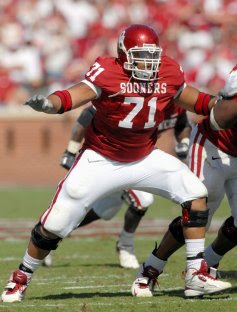 Despite the late rumors regarding the Redskins selecting Eric Berry, Coach Mike Shanahan finally addresses the offensive line by drafting Oklahoma Tackle Trent Williams with the 4th overall selection in the 2010 NFL Draft. Williams is 6'5 315 pounds, will anchor the offensive line that was decimated with injuries last season and filled with aging and undrafted players. Williams becomes the second offensive linemen the Redskins have drafted in the last ten years.

This selection shouldn't be a surprise since the Redskins needed a tackle. It was either going to be Russell Okung or Williams. Despite all the talk about drafting Okung at No.4 because he is the best linemen overall, Williams could be a better fit the Redskins.

Williams ran a 40 yard dash in 4.82 seconds, impressive for an offensive tackle. With his versatility, Williams can play any position at the Offensive Line and fits perfectly on the Shanahan's zone blocking schemes. This is a good pick for the Redskins since fixing the offensive line is the top priority on draft day.

Next pick the Redskins will have is in round 4 with the 103rd selection barring any trades. It is possible the Redskins could trade Albert Haynesworth or Jason Campbell for additional picks, but so far, nothing has happen yet. Stay tuned!!!

UPDATE: Mike Shanahan tells the NFL Network that he has no plans to trade Albert Haynesworth. Therefore, Haynesworth will remain a Redskin in 2010.
Posted by YasinJ