Preview of the 3rd Preseason game 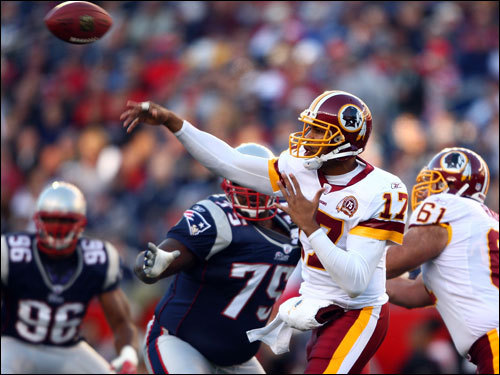 Well like last week, rain will probably be a factor by kickoff, and the Redskins will face yet another difficult opponent tonight versus the New England Patriots. The Patriots will bring in their dynamic offensive schemes led by Tom Brady. If Brady is anywhere near his form two years, then the Pats are hard to beat on offense.

Tonight game will be a challenge for the Redskins defense, who has given up a touchdown each of the first series by their opponents. Since the first team defense is playing for a full half, we should expect to see an idea how the defense performs throughout this season. Given that their facing Tom Brady, this defense could not ask for a better challenge tonight. Last time the Patriots faced the skins, they scored 52 points.

On offense, the Redskins first team offense have to put a very good drive together to get confidence back on the players and most importantly, the fans. Jason Campbell has to play better this time after his pathetic 1/7 for 10 yards performance last week. Campbell so far has been ignoring his critcs from the media and the only way he silence them is at least throwing a couple of touchdown passes and taking shots down the field. Look for Coach Zorn to also keep the first team offense on the field for a full half. The competition for the number 2 receiver and the 3rd string QB probably won't be resolved until the final preseason game, although Malcolm Kelly will like be the number two option when the season starts. But expect to see a lot of Colt Brennan and Chase Daniel for a least a couple of series or so.