Thoughts on the Redskins Name Change 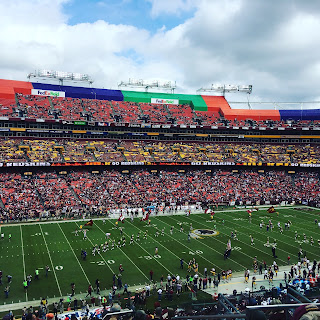 So I had a few days to think about the Washington Redskins changing their name. While I am personally not happy about it as a longtime fan, here are my five main takeaways regarding the name change.

1) Corporate Sponsors Pull Out: Fredrick Smith's statement from last Thursday on the Redskins changing their name was the ultimate deciding factor. Smith is the CEO of Federal Express (FedEx) corporation and he is one of three minority owners that owns 40% of the franchise. Washington Redskins Owner Dan Snyder has never face backlash from his corporate sponsors about the Redskins name until late last week. Smith has privately asked Snyder to change the team's name for several years to change the name and his public statement set a chain of events. The next day, Dan Snyder released a statement that the team will do a thorough review on the Redskins name. In addition, other corporate sponsors such as Nike, Walmart, and Dick's Sporting Goods pull off all Redskin gear from their website. Those sponsors publicly said they want the Redskins name to change.

On a side note, do not be surprised if Snyder sues Nike, Walmart, and Dick's Sporting Goods and ends up winning the lawsuit. Those sponsors breach the team's contract by pulling off the team's jerseys and apparel while selling other NFL team's apparel. Those sponsors have deals with the entire league.

2) Cancel Culture Strikes Again: The Cancel Culture are the worst type of people. They just never stop being offended and they act like they made a difference in caring for Native American lives. The people who were screaming for a Redskins name change never reference the 2016 and 2019 Washington Post poll showing that Native Americans support the Redskins name. Also, please do not tell me any nonsense on those polls being fabricated or fake. The Washington Post has been pushing for the Redskins name change narrative for over 30 years and I bet they were not happy to publish that poll result at all.

3) Bad Ownership: Dan Snyder has done nearly the impossible. The terrible performance on the field,  constant dysfunction in the front office, erosion of the fanbase has actually led to the name change being a less risk financially.  If the Redskins were winning right now and competing for a Super Bowl, the name would never change despite the climate we are living in today.  Snyder's poor mismanagement of the franchise has resulted in empty seats at FedEx Field, emptier parking lots, lower local TV ratings, fan apathy, and fewer apparel sales. There will never be a better time then now to do a name change and a complete reboot of the franchise.

4) Possible Ownership Changes? The bad performance on the field has led to anger and disgust internally at the ownership level. According to ProFootball Talk; three minority owners of the Redskins, Fredrick Smith, Robert Rothman, and Dwight Schar, are all looking for a buyer to acquire their 40% stake of the franchise. Now this story get's very interesting. If the new buyer buys the 40% minority ownership stake of the franchise, then the new buyer could buyout Snyder to control the franchise. Another possibility is that Smith, Rothman and Schar could buyout Snyder and acquire the entire franchise. The NFL wouldn't mind that to happen because the league and the other owners are very frustrated with Dan Snyder on how he's handled the franchise. In addition, Snyder frustration over the name change and the ongoing friction with his minority partners could lead him to selling the team. That would cause another parade in the Nations Capital.

One of the few positives that could come from a name change is either Snyder sells the team or be bought out by a new owner, and the franchise gets a new stadium in Washington D.C within the next several years. On the flip side, Snyder could still keep owning the majority 60% of the team despite a new buyer or buy the remaining 40% of the franchise to assure full majority control.

Either way, a potential sale of  40% ownership stake for the Washington Football team is a fascinating development and it's something to follow within the next several months.

5) New Team Name Prediction: Personally, I want the new name to be the Warriors to keep their historic tradition by honoring Native Americans, but it won't happen from a public relations view and where the world is heading to currently. Realistically, the new name will start with the letter R to keep the "HTTR" theme going and that new R name will be the Washington Redtails.

So, we all gonna have to get use to singing after every touchdown at home, "Hail to the Redtails!"