It's a Four Game Season For The Redskins 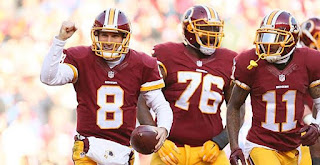 At 6-5-1, the Washington Redskins no longer can control their destiny for a wild card berth, but if they win their next four games, they will be in the playoffs in back to back seasons for the first time since 1991-1992. So far, the rest of the schedule is manageable with the Redskins facing one team with a winning record in their final four games of the season. Listed below is their final four games of the season.

While the path to the playoffs isn't daunting, the two major weaknesses for the Redskins could end their playoff chances.

RedZone Offense: The Redskins offense outside the 20 yard line is one of the best offensive units in the NFL. The offense can move the football against anyone in the NFL because quarterback Kirk Cousins is a great quarterback and he has plenty of  elite weapons to choose from. However, inside the 20 becomes a major problem for the Redskins. The playcalling becomes too complex, head scratching and sometime too much reliance on the passing game. This has lead to the Redskins being ranked near the bottom in the NFL in red zone offense.Offensive Coordinator Sean McVay has done a great job with maximizing his talent, but he along with his players are extremely pressing in the redzone and often times, the Redskins have to settle for field goals instead of touchdowns. McVay could be an upcoming NFL head coach in the near future, but if he wants to go that route, his team must find a way to score touchdowns in the redzone.  This issue is a coaching and personnel problem because the Redskins do not have a defense that is good enough to overcome redzone problems.

Defense: The Redskins defense is equivalent to a team from the Big 12 conference. The talent level is not very good at all. The unit is very weak in the defensive line and the secondary. Cornerback Josh Norman is their best defensive player on the field, but he alone cannot overcome the major flaws in the defense. The Redskins defense is dead last in the NFL in 3rd down, which means they cannot get off the field and force a stop.  That is a major problem for a team competing for a playoff spot. Teams that usually advance to the Super Bowl have a good defense. Fans want Defensive Coordinator Joe Barry fired, but firing him alone will not solve anything relating to the defense. This is a personnel problem and general manager Scot McCloughan must address the needs on defense only in the draft because his free agent signings in the past two offseasons has not entirely worked out. But for right now, the only way the defense can improve is playing the bend but don't break style, which means making big stops on 3rd downs and create turnovers to set up the offense with a short field. The Redskins defense has not committed a turnover since week 11 vs Green Bay. Therefore, the defense must find a way to create more turnovers in their final remaining four games.

Despite these glaring issues, the Redskins can still make the playoffs because their offense is extremely potent in the air and on the ground. However, it could possibly be a short stay in the postseason or be eliminated from playoff contention  if they cannot improve in the redzone and on 3rd down defense. The next four games will  test the character, toughness, and determination of what the Redskins are all about in 2016.