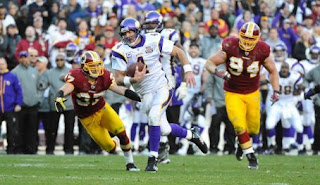 Like it has been for the last 11 years, FedEx Field has turn into a home of foreclosure for the Washington Redskins. Last Sunday, the Redskins endured their fourth home loss of the season as they lose to the Minnesota Vikings 17-13. The Redskins are 2-4 at home this season and 42-44 overall since 2000. The loss will be the eighth time decade that the Redskins will finish either at .500 or below at home. This loss isn't surprising since the Redskins have been inconsistent all season. The Redskins play to the level of competition every week. They play a close hard fought victory against good teams, and find stupid ways to lose when playing against bad teams.

The Redskins showed their inconsistency last Sunday. They committed costly penalties and receivers weren't catching the football. Whenever the Redskins missed a great opportunity, they never had enough talent to overcome those mistakes. The illegal block in the back penalty on rookie linebacker Perry Riley was a back-breaker for the Redskins. It occurred during what supposed to be a huge 77 yard punt return for a touchdown by Brandon Banks. If that penalty wasn't called, the Redskins would of possibly won the game, keep their playoff hopes alive, and I'll be talking about how amazing Brandon Banks is as a football player.

Instead, the Redskins are 5-6 and their playoff hopes are realistically over. However, even if they somehow got the victory, it will very hard for the Redskins to make the playoffs.

The running game wasn't a factor at all  because the team had to relied on backup Kelliand Williams and journeyman James Davis. Ryan Torain is still out with the hamstring injury, and Clinton Portis is out of for the season. The result with Davis and Williams was 29 total rushing yards. The Redskins are on track to have one of the worst rushing seasons in franchise history, which is very surprising since head coach Mike Shanahan usually has a great ground attack.

The poor running game, the inept performance on offense after a terrific 13 play drive to start the game, and the defense not making plays in crucial situations resulted in the Redskins loss. The next five games aren't going to get any easier either. Four of the next five are against teams with winning records.

But there is some good news. The Redskins are on track to finish with a 7-9 or 8-8 record this season, which is a major accomplishment.  This is essentially the same roster from last season despite changes at quarterback, a few free agent acquisitions, a couple of draft picks, and the front office. However, teams like the Kansas City Chiefs and the Tampa Bay Buccaneers are making major progress from last season disappointing record because of their rebuilding process through the draft, something the Redskins never did under Dan Snyder regime. If you compare the offseason moves between the Chiefs and the Redskins this year, it will make you even more angry at the Redskins front office again.

I really expect the Giants to destroy to the Redskins this Sunday despite their injury issues at the offensive line and at wide receiver. Giants quarterback Eli Manning is 8-3 against the Redskins and has won four straight games against them. The Giants need to win to keep pace with the Philadelphia Eagles in the NFC East. The Redskins are still mathematically alive for a playoff spot, but with some key starters out again because of injury, this game could be a blowout in the making.