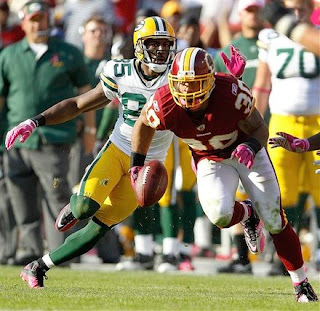 For 45 minutes, it appeared that the Redskins will leave FedEx Field and endure another disappointing home loss to the Green Bay Packers. Despite their miss opportunities, the Packers were dominating the game on both sides and the Redskins offense wasn't in sync. But when the 4th quarter arrived and trailing by the score of 13-3, the Redskins were facing a test of character, coaching, and adversity. When the game ended in overtime, they all pass with flying colors.

There are so many factors on how the Redskins won. The Packers did beat themselves and had several of their key players injured during the game. Also, it is worth noting that the Clay Matthews did not play late in the 2nd half because he suffered a hamstring injury, and it changed how the Packers were attacking on defense. But the Redskins won this game because of two players; Donovan McNabb, and Laron Landry.

First, McNabb became the difference maker on offense despite his mediocre performance. The offensive line was abused by Clay Matthews and A.J. Hawk. Tackles Trent Williams and Jammal Brown suffered minor injuries during the game. This lead to McNabb being sacked five times in the game alone.  Coach Mike Shanahan was constantly switching players in different positions on the offensive line, but it didn't make a single difference. McNabb had barely enough time to convert a pass, so he did a lot of scrambling to avoid the pass rusher. This led to his throws being completely inaccurate at various times. McNabb could of easily avoid his own abuse if he had a running game, which was ineffective during the entire game.

Despite his issues, McNabb did made some big plays to spark the offense in critical moments, such as a 50 yard completion to Santana Moss on 3rd and long early in the 2nd quarter, a touchdown pass to Armstrong, and a 30 yard completion to Chris Cooley late in the 4th quarter to set up Graham Gano's game-tying 45 yard field goal. Nevertheless, McNabb found a way to get the Redskins back into the game. This team wouldn't win these types of games last year under Jason Campbell at quarterback.

Secondly, Laron Landry has really step his game in a big way. Landry had 13 tackles, a forced fumble, and a interception in overtime to set up Graham Gano's game-winning 33 yard field goal. Landry leads the NFL with 41 total tackles, and he was named NFC defensive player of the week. Last season, Landry was criticized for his poor play in pass coverage, and his personal ego on the field. Today, the switch to the 3-4 defense has transformed Landry to one of the best strong safeties in the NFL.  So far this season, Landry is playing his best football of his young career, and he could get a big contract extension by seasons end if he keeps playing at a high level.

Overall, the Redskins were involved in another close game for the fourth time in five games and each of them came down to the last possession. Three of those games were in the win column.  I know these close games helps the NFL in terms of TV ratings, but I would like to see Redskins win some games by double digits for once this season. I'm not sure of I can really go through another close one next week.

Also, whenever a team gets a good head coach and a decent quarterback, teams will overcome from adversity, whether its trailing by big margin or overcoming a key injury from a impact player. The Redskins showed it last Sunday, and it could lead to big things in a wide open NFC East this season. Eventually, the injury situation in the offensive line, the lack of running game, and giving up a ton of yards on defense will catch up to them. But if this team can find ways to win in close situations, then everything will work out at season's end.

Colts quarterback Peyton Manning comes into town as a pair of division leaders meet up in a primetime showdown. Both teams are 3-2, and are looking to stay in first place in their respective divisions. A preview of this matchup will be coming up later this weekend.
Posted by YasinJ