So Many Missed Opportunities (UPDATED) 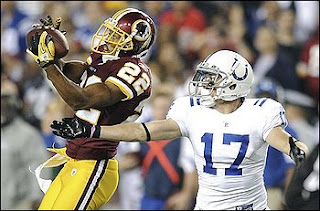 Last Sunday night, the Washington Redskins let their golden opportunities slip away as they fall to the Indianapolis Colts 27-24. This was a tough game to lose since the Redskins had several opportunities to win the game, but their secondary struggled to catch an interception. Before I'll analyze on what could of been a season defining victory, let's look at the positives and negatives from this tough lost.

The Positives: The ground game finally became effective. Running back Ryan Torain had his best game of the season last Sunday. He had 20 carries for 100 yards and two touchdowns. Torain is the first Redskin running back to run for 100 yards or more since week 9 of last season. The defense and special teams find ways to kept the Redskins in the game. They continue to play physical, and committed 3 turnovers. Despite the defense giving up 469 total yards of offense, they found ways to keep the game relevant.

The Negatives: The offense was never consistent in critical situations, despite the defense helping them. Quarterback Donovan McNabb was still inaccurate in most of his pass attempts, and it was evident in the Redskins first offensive series. When the Redskins were inside Colts territory and about to take a early lead, McNabb under thrown a quick slant pass to Santana Moss and it was intercepted by Colts cornerback Jerraud Powers. That interception led to Peyton Manning's 57 yard touchdown pass to Pierre Garcon. The Colts had a 7-0 lead and never trailed the rest of the game despite their mishaps. The secondary could of easily give the Redskins the victory if they had good hands to catch the football. Cornerback Carlos Rodgers dropped two interceptions, and Kareem Moore drop one also. Rodgers has always been a great cover player, but he struggles to catch an interception. I think its a mental problem for Rodgers, and its so frustrating  to see him drop easy picks that can change the momentum of the game.

Overall: At least the Redskins made the game interesting, and they had plenty of chances to upset the Colts. They are good things to build upon from this game. The defense continues to create turnovers and gives the offense a chance to score with excellent field position. The Redskins might have found a decent running back, and the passing game should be effective as McNabb adjusts to the new play-calling schemes from offensive coordinator Kyle Shanahan. However, the defense is struggling to stop the running and the passing game. It will be nice of Albert Haynesworth was active last week, but unfortunately, he was watching the game from the owner's box. So the Redskins are 3-2 in games that are decided by 6 points or less, and 3-3 overall. Not a bad start considering that the Redskins had a brutal stretch to begin the 2010 season.

It is homecoming weekend for McNabb and Shanahan as they return to their hometown city of Chicago Illinois. Both of them played high school football in the Chicago metro area, and McNabb has a 4-1 record at Solider Field. It is also a matchup against one of Shanahan former starting quarterback from Denver, which is Jay Cutler. Cutler will be dealing with a bad offensive line, so look for the Redskins front seven to create even more havoc for Cutler. I also don't expect Torain is have a big game because the Bears are ranked thrid in the league in run defense. So Torain could have problems finding any holes in the ground game. This should be a close contest, but I think Redskins defense will win this game because of the Bears offensive line issues, and McNabb always find ways to win in the windy city.