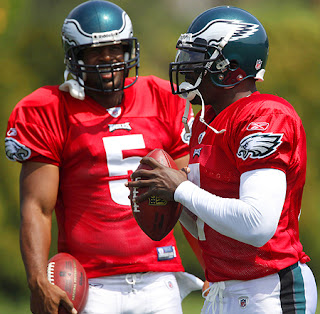 The biggest game of the NFL regular season occurs today at 4:15 P.M. as Redskins travel to Lincoln Financial Field to face the Philadelphia Eagles in a key divisional matchup. This game will heavily focused in the media as Donovan McNabb returns to Philadelphia wearing a Redskins uniform. It will be interesting to see how Eagles greet the six time pro bowler, but they should really cheer for him.

Under McNabb's tenure, the Eagles went to five NFC championship games, one NFC title, and one Super Bowl appearnce. McNabb is also the all time franchise leader in career wins, pass attempts, pass completions, passing yards, and passing touchdowns. However, injuries and other solid quarterbacks in the depth chart led to McNabb arrival in Washington. Today, McNabb wants to prove to the Eagles organization that he can still play at a high level and lead the Redskins to the Super Bowl down the road. However, Philadelphia sports fans tend to be very obnoxious, so don't be surprised if McNabb gets boos from the fans today.

If McNabb wants to lead the Redskins to victory, they will have to improve on red zone efficiency, and on 3rd down attempts.  Last week, the Redskins went 0-3  in the red zone and only settled with field goals. That didn't work out well against the Rams, and it will certainly have the same result against the Eagles. Given that the Redskins is last in the league in total defense, scoring touchdowns in the red zone is very critical in this game today. Also, converting on 3rd downs will help because it keeps the offense on the field and gives the defense a rest.  Going 1 for 10 on 3rd downs isn't going to win any game in the NFL. Finally, the Redskins need to establish the run game for a full 60 minutes.

The defense will have a very tough task today. The Eagles are led by quarterback Michael Vick, who appears to resurrect his NFL career. So far this season, Vick has thrown for 750 yards, 6 touchdowns, and zero interceptions. He has a 60.7% completion rate. Vick has a golden opportunity to steal the spotlight from McNabb today. He has a great wide receiving core such as Jeremy Maclin, and Desean Jackson. Since the Redskins have been terrible in pass coverage, this could be the game that Vick goes into another level and return back to being an elite quarterback in the NFL.

Prediction: Statistically, the Eagles should destroy the Redskins because the Eagles are a hot team and the Redskins are struggling everywhere. But this is a divisional game and the Redskins always play tough at Philly. Therefore,  I expect a shootout and a close football game that will come down to the final possession. I think McNabb leads the Redskins on a late 4th quarter drive and Graham Gano kicks the game winning field goal. McNabb will get his revenge and the Redskins move to first place and a 2-0 record in the NFC East.